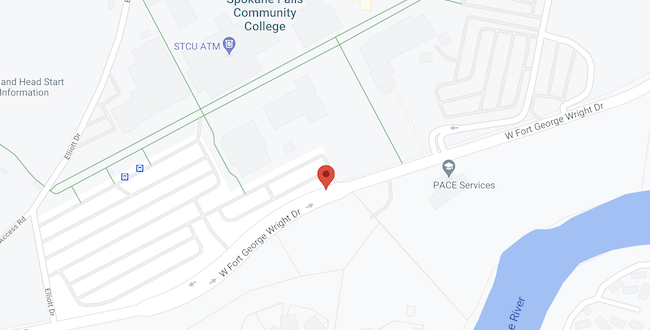 Update: On Nov. 11 The Spokane City Plan Commission voted unanimously to change the Whist-alks Way. Now it it will move to the City Council for consideration by the end of the year.

Today, (Nov. 11), Spokane City’s Plan Commission is voting on a proposal presented by the Spokane Tribe of Indians to rename Fort George Wright Drive to Whist-alks Way. This would change the street in front of Spokane Falls Community College from a memorial of a violent colonizer to a celebration of a brave Native American warrior.

Colonel George Wright came to the area that is now Spokane City in the mid-1800s and violently took the land from its native inhabitants. In response to warfare performed by Spokane and Yakama Indians against the invaders, Wright led 600 troops “to subdue the Indian tribes of eastern Washington by any means necessary.” This included killing many of the natives and hundreds of their horses, the destruction of food supplies, and betrayed native leaders.

Despite the raw and violent power displayed by Wright, Whist-alks fought to free her husband. The tribe’s account records her as saying, “I tried to cut one soldier with my knife, but another one kicked the knife out of my hand and then a great number of soldiers crowded in, overpowered us.” She then stole a sabre from a soldier and escaped by horse.

Wright’s journal reads, “Qualchan came to see me at 9 o’clock, at 9:15 he was hung.” This was the first of 16 hangings of natives of the area, all without trials.

Whist-alks emerges from this story as a strong warrior who stood and fought in the face of invasion. While she was unable to rescue her husband, she fought for him and escaped with her own life.

Her story reminds me of Jael, a strong woman from the book of Judges in the Bible:

Like the Americas, the land inhabited by the Hebrews was facing threat of invasion. (Note: the Hebrews were not the native inhabitants of this land and their prior invasion of it is problematic. But historically, Israel was a much smaller nation with less military might than their neighbors, and this unequal power dynamic still makes this an analogous story.)

Israel faced the impending threat of Canaan’s army under the leadership of Sisera. The political and military leaders of Israel destroyed Sisera’s army in organized military fashion, and Scripture tells us that God was on their side, that “stars fought from the sky; from their orbits they fought against Sisera” (Judges 5:20, CEB). Still, Sisera escaped and went to the tent of Heber and Jael the Kenites who had left their own land and lived among the Israelites. Jael surreptitiously welcomed the military commander into the tent and snuck up behind him with a tent stake while he was sleeping. “She drove the stake through his head and down into the ground, and he died” (Judges 4:21b). When organized strategy failed, she relied on the tools she had and guerilla tactics. And Scripture celebrates her efforts: “May Jael be blessed above all women” (Judges 5:24a).

Although Whist-alks did not succeed in slaying Col. Wright, she cannot be blamed for her efforts to do so. God stands on the side of the oppressed, of those whose land is being invaded by malicious, power-hungry outsiders. Indeed, Whist-alks ought to be celebrated, to “be blessed above all women,” for her efforts to defend her people. Renaming Fort George Wright Drive would be one small way of celebrating her. In so doing, we would be bringing her name to the public’s attention and thus telling her story and celebrating her bravery.

Previous How you can help veterans every day
Next Dear President-Elect Biden: Heal the country. Pardon Trump