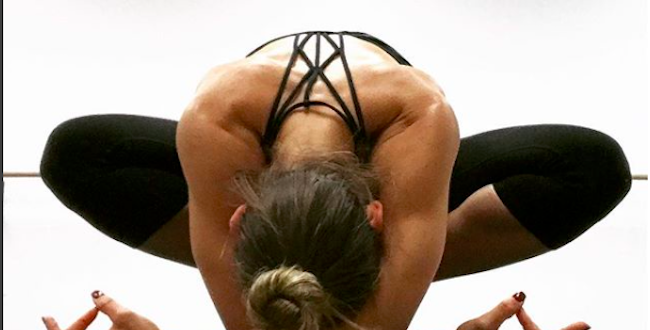 From competition to community

That’s what every participant receives at the end of their workout from Jessi Thompson, founder of refitness Studio.  Thompson founded the studio as part of her journey from competitive athletics to a philosophy of inclusive fitness, one where people from all fitness backgrounds can workout together, challenging and encouraging each other to live a healthy life.

Her journey began 14 years ago after the birth of her first child.  Like many new moms, whose body had just performed the feat of childbirth, she was looking for a way to get back into pre-pregnancy shape. Encouraged by her husband, an Ironman triathlete, she began training for mini-tris such as the Valley Girl Triathlon.  This led to longer triathlons, including a couple of Ironmans, which consist of a 2.4-mile swim, 112-mile bike ride, and 26.2-mile run.

The training schedule and competitive nature of the sport, added to her already busy life as a mother and 4th-grade teacher, eventually wore on her relationships.  In 2010 she stopped competing, and shortly thereafter gave birth to her second child.  This time her body took more of a beating, and she began taking barre classes to increase her core strength and repair the damage.  After getting certified she began subbing for a fitness instructor who was on maternity leave.

She also began training to teach spin classes.  A member of their triathlon club had 18 stationary bikes stored in her garage in a secluded area outside of town.  Thompson invited others to carpool with her, and there she practiced her choreography.  She had been contemplating starting her own studio when one day the owner of the bikes decided she wanted to sell them. Thompson had a week to decide to purchase them; after a lot of prayer and a loan from her parents, she did.  This was followed by taking out a second mortgage on their home, and refitness Studio was born.

The “gift of the garage”, as Thompson puts it, fostered the realization that exercise doesn’t need to be fancy or competitive.  It could take the form of a group of friends getting healthy together in the middle of nowhere.  When she opened the studio in June of 2015, there was green paint on the walls, old carpet on the floor, and 18 friends getting sweaty together.

Her philosophy also comes from disappointment with the exclusivity of our culture, where in so many areas of life some people are “in” and others are “out.”  This includes religion; at a place that preached about love she was continually told that some people were more worthy of that love than others.  She wondered, “how could this all-loving God be mad all the time? How could we be amazing extensions of him and yet be so terrible? How could my best friend’s mom (a lesbian) be going to hell for being such an amazing person and loving me so well?” She saw dissonance between speaking love and doing it, and a lack of compassion for the “other.”

Henri Nouwen writes about how difficult compassion is in a competitive world.  We live in a culture that values getting ahead at the cost of others.  But compassion is willingness to enter into the suffering of others, showing kindness and gentleness to those who get hurt by competition.  It requires us to be vulnerable, a state that is not valued in our dog-eat-dog world.

Thompson has worked diligently to cultivate a community of vulnerability and openness at re. She knows the bad experiences people have had with gyms and the shame around exercise. Working out is often considered punishment for having eaten something “bad”.  Some still feel the pain of being picked last for sports in P.E. Jessi has created a safe place for the wounded; it is no coincidence that there are no mirrors on the walls.

The “re” in refitness stands for everything participants do together… renew, rejuvenate, rediscover, reenergize, and reawaken.  As she states on her website, “RE actually means “again” and I feel like the journey to health and strength is all about finding and loving ourselves again.”

Thompson also fosters an atmosphere of challenge.  All she asks it that you drain whatever you have in the tank when you come to class, whether that be one gallon or 20.  She encourages each person, often with the words “You can do hard things!” In turn, participants encourage each other through 45 minutes of intense exercise with high fives and verbal affirmations, and at the end of class Thompson reminds everyone that their show-ups matter. They are there not only to better their own health but to add to an atmosphere that benefits their neighbor.

Thompson teaches 18 hours of spin, barre, and yoga each week in addition to her part-time position at Brentwood Elementary, so she relies heavily on this community she has fostered.  Participants help move bikes, distribute towels, and take out the trash.  They’ve also offered up creative ideas for car decals and merchandise.  Even accountability comes out of a place of community; instead of charging people for late cancellations, Thompson relies on an honor system of adhering to her 24-hour cancellation policy. It works: rarely do you see an empty bike during class.

Now, two and a half years later, there is white paint, wood flooring, 31 bikes, and a barre that wraps around three quarters of the studio. The aesthetics have improved (although it’s still not “fancy”), but the philosophy remains the same. Thompson doesn’t talk love, she does love.

One sweaty bear hug at a time.

View All Posts
Previous Is it really worth arguing about?
Next The humanity of violence