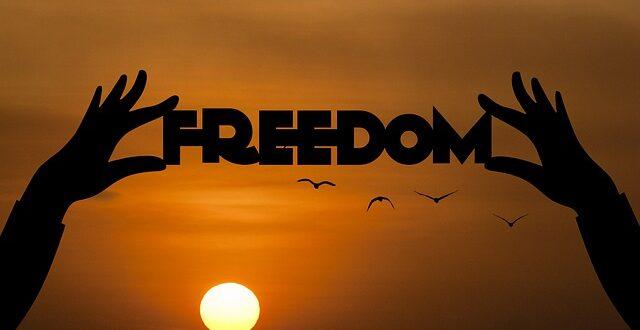 “Freedom isn’t Free” is proclaimed on billboards, bumper-stickers, t-shirts. This assertion is so ubiquitous in America one might suppose it to be true.

According to Wikipedia (which is, like FāVS, a free valuable resource which deserves our financial support), the origins of the phrase “Freedom isn’t Free” are obscure (possibly Australian). It became popular in the U.S. after 9/11 to emphasize the need for sacrifice, particularly military sacrifice, to combat terrorism.

My kind-hearted wife thinks “Freedom isn’t Free” might mean that that those among us with means should pay significant taxes so that the poor among us have equal access to health care, education, child care, adequate housing—all that is necessary to enjoy a degree of freedom.

But “Freedom isn’t Free” is most commonly used to call for increased military spending and  to honor the sacrifice of our veterans. It is, for example, on the Korean War Veterans Memorial.

At the risk of seeming patriotic and ungrateful, I confess that the phrase and its implications rub me the wrong way.

This may be because as a child raised in a traditional Christian faith, I learned that my freedom came not through military force but through Jesus’ sacrifice on the cross.

As an adult I wonder, if freedom isn’t free, is it freedom? What is the meaning of freedom? The etymology and early uses of the word link it to love, for to be free meant to be set free from bondage, to belong to the beloved community.

The ultimate source of freedom in this tradition is God. Some of my favorite moments in the Bible bear witness to this.  In the Book of the Job, when the LORD responds out of a whirlwind to Job’s questions, the LORD draws Job’s (and our) attention to many wild creatures, among them the onager, or wild ass: “Who has let the wild ass go free? /Who has loosened the bonds of the wild ass, / to which I have given the steppe for its home: / the salt land for its dwelling place? / It scorns the tumult of the city; / it does not hear the shouts of the driver. / It ranges the mountains as its pasture,/ and it searches after every green thing” (Job 39:5-8 NRSV).

Here to be free for an animal clearly means to be free from human control, to be able to live wild, in its own environment, in its own beloved community. Many consider the LORD’s response as a put-down, irrelevant to Job’s suffering.  I see it rather as an effort to free Job from his suffering through a verbal wilderness experience, to release him for a while into the wild.

The value of wildness for us all is captured in Thoreau’s declaration, “In wildness is the preservation of the world” (“Walking,” pub. 1862), now the fitting motto of the Sierra Club. Portions of the world need to be free from human control to keep our spirit free and to sustain the world as a whole.

That naming is a form of control is humorously, profoundly illustrated in Ursula K. Le Guin’s short story, “She Unnames Them” (The New Yorker Jan. 21,1985), narrated by an unnamed She who unnames all the animals; some are at first hesitant to be unnamed, but all are finally glad to experience their freedom. She then tells her obtuse husband that she has released the animals from the control of the names that “you and your father” gave them and walks out of the garden between “the dark-branched tall dancers” on the horizon.

Of course Le Guin here provides a feminist counter-narrative to Genesis 2:19-23 in which Adam names all the creatures the LORD God presents before him and finally the Woman fashioned from his rib.  She (and She) is suggesting that ultimate freedom may be in freedom not only from men but also from God, or at least a masculine God whom we can name.

Most of us probably do not want completely wild freedom. We want our names. They may signify our belonging to a beloved community.  And we are grateful to those who protect this community.

But our freedom resides elsewhere, and it is free.