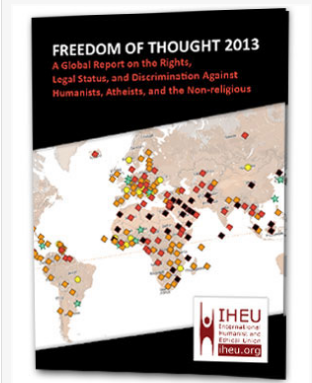 Freedom of conscience far from global 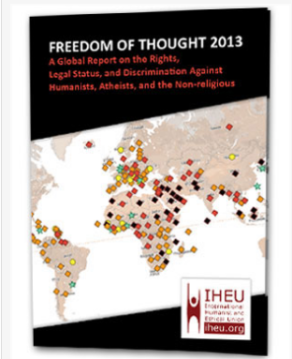 For some years the International Humanist and Ethical Union has compiled an annual Freedom of Thought Report, and their 2013 edition surveyed 194 countries, ranking them by how tolerant they are of nonbelievers.

Their analysis only listed each country, not how many people live there to get a sense of proportional factors (a non-believer may face a different level of pressure to conform when accused of “blasphemy” in a country of half a million versus half a billion).  So I thought to couple their listing with information from a recently released Pew Research survey on the “Global Religious Landscape” (part of their Religion & Public Life Project available at pewforum.org) that broke down estimated 2010 religious affiliations by country and population.

The Pew study listed 2.2 billion Christians (the most dispersed of the world’s religions), 1.6 billion Muslims, 1.1 billion expressing no religious affiliation (many of which may well be atheists and agnostics, while others will simply be spiritual but uncomfortable with denominational identification), 1 billion Hindus, 500 million Buddhists, 458 million belonging to folk or other religions, and 14 million Jews (with as many living in the United States as in Israel).

Although about 55 percent of the world believes in the God of Abraham, the doctrinal divide between Christians, Muslims and Jews means that no matter what you believe (or not) in the way of faith, most of the people on Earth do not believe what you do.  Everyone is a minority when it comes to matters of spirituality and faith.

This may not be so apparent for many people because they live in societies where they are the majority view.  This is true even for the unaffiliated (71 percent living in states where they are in the majority: the Czech Republic, Estonia, Netherlands, Japan and South Korea, along with the officially atheistic dictatorships of North Korea and the population curve skewing China), with Muslims 73 percent, Christians 87 percent, and Hindus 97 percent.

Combining the various population figures with the IHEU breakdown reminds us of some disconcerting realities, not only for nonbelievers, but also for people of faith.  I have highlighted in bold the countries where the “nonaffiliated” are the technical majority.

Only 262 million people (4 percent of the world’s population) live in the 15 countries that achieved the IHEU’s rare “Free and Equal” category: “Freedom of religion or belief is upheld and there are no known cases of discrimination against non-religious individuals.”  In alphabetical order: Belgium, Benin, Fiji, Jamaica, Japan, Kiribati, Kosovo, Nauru, Netherlands, Niger, Sao Tome & Principe, Sierra Leone, South Korea, Taiwan and Uruguay.

And almost 2.5 billion people (37 percent) live in the 30 nations accused of “Grave Violations,” where ruling elites or religious authorities have complete power, nonbelievers are banned from public office and violence against opponents can occur with impunity.  Being atheist or nonreligious is illegal or not recognized as a legal condition, and religious or political indoctrination is ubiquitous in schools.  The paranoid Stalinist theme park of North Korea naturally shows up here (where expressing a religious faith can be very dangerous indeed), along with Afghanistan, Bahrain, Brunei, Bangladesh, China (where the state pokes its nose into everything, such as grappling with the Catholic Church over bishops and priests not approved by the Communist Party), Comoros, Egypt, Eritrea, Gambia, Indonesia, Iran, Iraq, Jordan, Kuwait, Libya, Malaysia, Maldives, Mauritania, Morocco, Nigeria, Pakistan, Qatar, Saudi Arabia, Somalia, Sudan, Swaziland, Syria, United Arab Emirates and Yemen.

This means that two-thirds of the world live under jurisdictions where atheists can face quite real threats to life and liberty for unbelief, or for abandoning a majority religion for another faith. Fifty-five countries treat “blasphemy” as a crime, punishable with prison sentences in 39 of those and by death in six. Apostasy can get you killed in a dozen countries, and for some blasphemy can be taken as proof of apostasy.

Altogether, not a pretty picture—Spinoza would shed a tear.

Previous Pagan parenting 101
Next Today’s Coffee Talk: The Wonder of the End