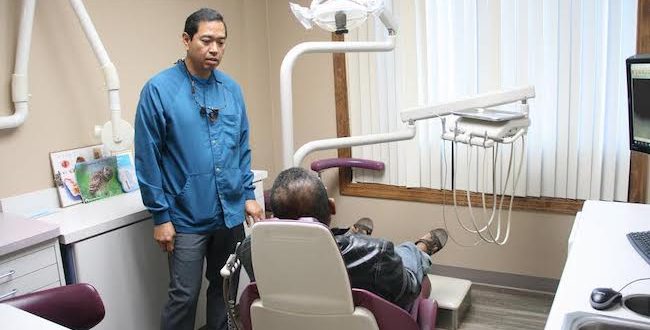 Dr. Adrian Tomarere drove two and a half hours from Omak to volunteer his dental services on the clinic’s first day. He is pictured here with his third patient of the day, Carlos Perez-Prado/Cassy Benefield - SpokaneFāVS

Seventh-day Adventists take health and wellness seriously, and one of the ways they minister to their communities with the Gospel of Jesus Christ is through wellness centers.

It made sense, then, that on May 24, the Adventist-run Better Living Center (located 25 E. North Foothills Drive between the Division and Ruby) opened its doors to a new dental clinic to serve clients at no cost.

“Adding this clinic is just an extension of what we do as Seventh-day Adventists in seeking to build people up, making them healthier, happier people,” said Jay Wintermeyer, assistant to the president for communications at the Upper Columbia Conference of Seventh-day Adventists. “It really comes from Jesus’ example. Where he ministered to people’s needs. He fed them. He healed them. And what better example than to follow what he did.”

Volunteer-run, from the receptionists to the dentists, and including the hygienists and dental assistants, this clinic provides Spokane’s low-income and under-served population free dental care services, including exams, x-rays, cleanings, fillings, and extractions.

Before adding the free dental clinic, the Center mainly functioned as a food pantry connected to Second Harvest Food Bank, servicing more than 400 families, who live in the 99205, 99207, and 99208 zip codes, with 40,000 pounds of food each month.

In order to qualify for the free dental services, clients need to live in these same zip codes, be 18 or older, and have an income that is at or below 185% of the federal poverty level.

The story of the clinic’s inception reveals a series of coincidences the local Adventist community sees as God’s divine hand.

About two years ago, the board of directors wanted to do more health outreach and community service through that location and sought advice from the medical community as to what was Spokane’s greatest healthcare need. With one accord, they said dental care.

Around the same time the board members were asking about the community’s health needs, the television station He’s Alive TV relocated from the Center to the UCC office at 3715 S Grove Rd., just south of Spokane, which then opened up more space for this kind of clinic.

Lastly, there was Dr. Tom Cho, a dentist who had just moved to Spokane from the west side of the state.

On one of his commutes to work, being an Adventist himself, he was curious about the Center. Gayle Haeger, the Center’s executive director, said he walked in one day after they finished with the food bank work and asked, what is this place?

“They showed him around, and he immediately saw dental offices in his mind’s eye,” Haeger said. “And so he has been our mentor through all of this and has been very supportive and helpful and just really been involved.”

After the board prayed about Cho’s vision and the community’s need, they pursued an estimate and started fundraising. In about three months, they met their financial goal.

In total, the clinic took two years to build, costing about $185,000. They also received donated dental equipment, as well as received great prices on gently used equipment, furnishing a clinic that includes a reception area, two dental chairs, a sterilization room, and even a medical examination room to be used in the future.

According to Maureen Finneran, Spokane’s program manager for Arcora, Delta Dental of Washington’s foundation, in 2017, only 24 percent of adult Apple Health enrollees in Spokane County had at least one dental service, which is a little higher than the statewide average of 22.5 percent.

“Stated differently, 76 percent of adult Apple Health enrollees in Spokane County did not access dental care,” Finneran said. “The new clinic will help boost access to care for Spokane adults, many of whom do not have access to care due to barriers including paying for care and transportation.”

Needless to say, Cho was like a proud father, overseeing the clinic’s opening day.

“We’re really thankful the clinic is open and that we’re able to help the people in Spokane for their dental needs,” Cho said. “We know that there is a huge need out there, and the fact that this is all volunteer run is very inspiring because there are good people out there that are willing to do that—to better Spokane—and I’m thankful I could be a part of it.”

Excellent post. I was checking continuously this blog and I’m impressed! Very helpful information particularly the last part 🙂 I care for such info a lot. I was seeking this particular information for a long time. Thank you and best of luck.|

The details mentioned within the write-up are several of the top accessible.

Below youll discover the link to some websites that we believe you must visit.

Thats what an angel is. Dust pressed into a diamond by the weight of this world. #TheOA needs your help. #SaveTheOA

Hey! Let me introduce you to our community!

Get your Lifetime Access to powerful shopping cart software. It allows you to list and sell any products online. It can handle digital or physical products and even services.

It works in ANY business niche. You can create subscriptions and payment plans, and it integrates with all of the major payment processors.

I’m happy to be able to recommend a great tool to help you grow your business, and even more excited when that tool is totally free forever. And thanks to Mike Filsaime and our team at Groove… I’m ecstatic!

Our company is making a true, meaningful difference in people’s lives by carving off MAJOR portion of their full product. We made the basic tools needed to start running an online business absolutely free… not just while we’re on lockdown… not just for a few month trial… not even for a year… but FOREVER!

Now I’m not talking some dumbed-down feature-locked version of the software. We are releasing the whole shebang… every feature, every UPDATE… and you’ll never have to pay them a dime. And it’s a seriously powerful tool!

Chances are you’re paying $99 or $199 a month right now for something that’s less powerful.

So grab your account and grow your own online business today!

I wish you a Merry Christmas! My name is Kelley Herring.

My educational background is nutritional biochemistry. Over the years, Ive spent a lot of time in the library and the laboratory. But my true passion is for the culinary arts…

And it is the kitchen laboratory where my hearts truly at home… cooking, baking and creating recipes.

Nearly 20 years ago, I founded a company, called Healing Gourmet

Since then, weve become the worlds leading provider of healing recipes and meal plans combined with science-based education on the power of foods to promote health and protect against disease.

Traditional Bread is the #1 Health Danger In Your Diet and Contains a Hidden Compound that Makes it Nearly IMPOSSIBLE to Burn Fat & Lose Weight!

I Reveal the Secret So You Can Enjoy Delicious REAL Bread without Worrying about Your Health, Your Blood Sugar… or Your Waistline!

You Dont Need to be an Experienced Baker to Achieve Superior Results. Try Keto Breads Today Risk Free! You Have My 60-day Money-Back Guarantee…

My name is Kelley Herring.

My educational background is nutritional biochemistry. Over the years, Ive spent a lot of time in the library and the laboratory. But my true passion is for the culinary arts…

And it is the kitchen laboratory where my hearts truly at home… cooking, baking and creating recipes.

Nearly 20 years ago, I founded a company, called Healing Gourmet

Since then, weve become the worlds leading provider of healing recipes and meal plans combined with science-based education on the power of foods to promote health and protect against disease.

Traditional Bread is the #1 Health Danger In Your Diet and Contains a Hidden Compound that Makes it Nearly IMPOSSIBLE to Burn Fat & Lose Weight!

I Reveal the Secret So You Can Enjoy Delicious REAL Bread without Worrying about Your Health, Your Blood Sugar… or Your Waistline!

You Dont Need to be an Experienced Baker to Achieve Superior Results. Try Keto Breads Today Risk Free! You Have My 60-day Money-Back Guarantee…

Some people follow everything the ‘gurus’ teach. To a “T”.

Others go against the grain. They challenge the status quo.

That’s what I do. And that’s how Ive made MILLIONS.

The crazy thing is…

I have made millions using a simple, secret ‘ethical’ email marketing system…

Think about that for a second:

Someone made millions of dollars – over 7 figures – just from sending emails. And it’s so simple, anybody can do it!

I formulated a system that allows you to build a true lifestyle business, where you can have the freedom you desire…

By creating a ‘business machine’ that works for you 24/7. All you have to do is oversee the system.

No product creation. No chasing clients or delivering services.

Skip the BS and jump right into getting results!

Check this out and lock in your savings here:
>> https://bit.ly/Secret-Mail-System

We GUARANTEE no one will tell your voiceover is A.I. generated

Follow these 3 Steps and transform any text into a HUMAN SOUNDING VOICEOVER!
STEP 1:- Paste Your Text
STEP 2:- Choose a language and a VOICE
STEP 3:- Generate & Download