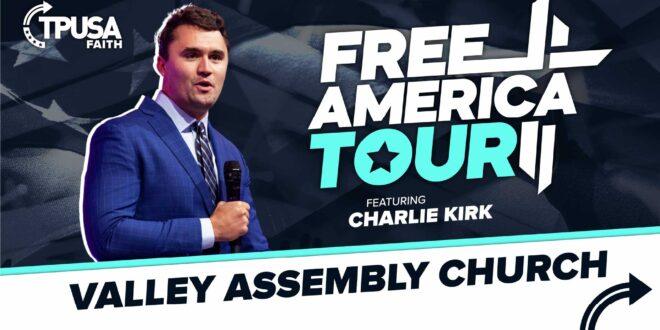 Picture of the event slide / Contributed

TPUSA was founded in 2012 by Kirk, author of the 2020 book “Maga Doctrine: The Only Ideas That Will Win the Future.”

TPUSA’s tagline on its webpage is to “play offense with a sense of urgency to win America’s culture war,” with the key focus on college campuses and K-12 classrooms. Together with its two-year-old offshoot, TPUSA Faith, these organizations put on events all across the country.

TPUSA Faith is driven by the sense, that “the biblical values upon which our nation was founded are eroding at a frightening pace – and millions of Americans are desperate to see them restored.”

As such, this part of Kirk’s organization is to “engage, equip, and empower millions of grateful Americans who are prepared to defend [their] God-given rights, by giving them the tools to expose lies and articulate the connection between Faith and Freedom.”

For Noble, the biblical values he wants to see restored is in the separation of powers our founders created, which he views things like “executive orders,” whether enacted by the governor of a state or the president of the U.S., as against that principle.

“In other words, you don’t have a king. We don’t live in a theocracy, but [when] we have a separation of powers, we experience the most freedom,” said Noble.

This is not something Kirk espouses today, according to Matthew Boedy in his article “Ten Years of Turning Point USA: From Free Markets to Freedom Square” for Political Research Associates, publisher of Religious Dispatches.

“While once Kirk vowed to never politicize his religion … he now says the church should accept its rightful role as counselor to and more authority of government,” he wrote.

Later in the same article, Boedy writes, “at the February 2020 CPAC convention, Kirk offered his most public endorsement of Christian nationalism yet when he praised Trump as a president who understands the ‘seven mountains of cultural influence’: a term frequently used by Christian nationalists to refer to various areas of society that adherents believe Christians are entitled to control as they take ‘Dominion’ over culture and laws on behalf of God.”

Noble said he does not believe Christian nationalist ideology, using the Crusades as an example, saying that was a “horrible idea.”

Still Noble agrees with enough of TPUSA and TPUSA Faith’s positions to see no problem hosting their events at his church.

“We don’t financially support them, but we are having them come and we’re going to be supportive,” said Noble.

The “Free America Tour” will be the second TPUSA event hosted at Valley Assembly.

In July, Noble’s church hosted TPUSA Faith’s “Freedom Night in America,” featuring Rob McCoy and special guest Sean Feucht, who is one of the top 20 false prophets of Christian nationalism, according to Faithful America’s “False Prophets Don’t Speak for Me” website.