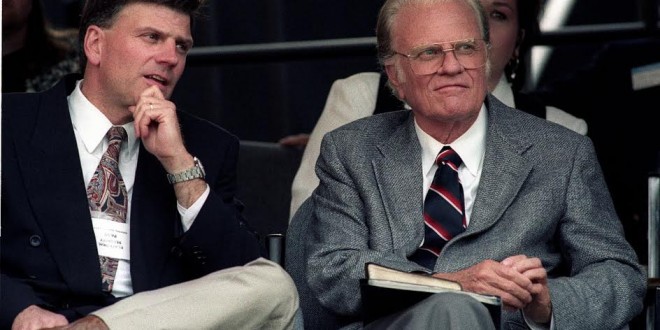 In a post published on Facebook last Wednesday, Franklin Graham, son of evangelist Billy Graham, announced his support of Donald Trump’s proposed moratorium on Muslim immigration. Graham said in his post that he has “been saying that Muslim immigration into the United States should be stopped until we can properly vet them or until the war with Islam is over“ for “some time.”

Based on Graham’s earlier statements, it’s quite likely he intended to refer to either “radical” Islam or Islamic terrorism, and not the entire religion. He wasn’t finished, however.

“Research shows that there are 2.75 million Muslims living in the U.S.,” he added.  He continued, citing a study conducted earlier this year by the Center for Security Policy.

A post at Townhall observed that “California Democratic Rep. Loretta Sanchez says that we may not have a full understanding of how many Muslims believe that violence is acceptable to spread Islam.”

“But certainly, we know that there is a small group, and we don’t know how big that is — it can be anywhere between 5 and 20 percent, from the people that I speak to — that Islam is their religion and who have a desire for a caliphate and to institute that in any way possible, and in particular go after what they consider Western norms — our way of life,” she said.

It only took two to kill 14 in San Bernardino, and less than 20 to take down the World Trade Center in 2001. Only a fool would ignore the potential security threat faced by all Americans.

Politicians and pundits on both sides of the political aisle have soundly criticized Trump for his proposal.  Additionally, others have weighed in with the obligatory calls to murder Trump and his supporters.

Despite the criticism, a growing number of voters have said they approve of what Trump has proposed.  Last Thursday, Rasmussen reported that over 60 percent of Republicans and 46 percent of all likely voters support the idea of a moratorium.

Forty percent of all those polled oppose the plan, while 14 percent remain undecided.