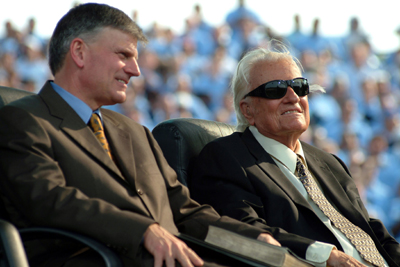 Franklin Graham: Putin is better on gay issues than Obama

Evangelist Billy Graham, right, with son Franklin Graham, at a crusade in New York in 2005. Photo by Michael Falco

Graham, who now heads the Billy Graham Evangelistic Association started by his famous father, praises Putin in the March issue of the group’s Decision magazine for signing a bill that imposes fines for adults who promote “propaganda of nontraditional sexual relations to minors.”

The Russian law came under heavy criticism from gay rights activists, and from Obama, ahead of the Winter Olympics in Sochi, Russia. In response, Obama included openly gay athletes as part of the official U.S. delegation to Sochi.

“In my opinion, Putin is right on these issues,” Graham writes. “Obviously, he may be wrong about many things, but he has taken a stand to protect his nation’s children from the damaging effects of any gay and lesbian agenda.”

“Our president and his attorney general have turned their backs on God and His standards, and many in the Congress are following the administration’s lead. This is shameful.”

With the caveat that “I am not endorsing President Putin,” Graham nonetheless praised Russia’s get-tough approach toward gay rights.

“Isn’t it sad, though, that America’s own morality has fallen so far that on this issue — protecting children from any homosexual agenda or propaganda — Russia’s standard is higher than our own?”

Graham also implicitly seems to side with Putin’s ally, embattled Syrian President Bashar Assad, in the ongoing civil war that has claimed more than 140,000 lives. Syria’s small Christian population has largely sided with the Assad regime throughout the three-year conflict.

“Syria, for all its problems, at least has a constitution that guarantees equal protection of citizens,” Graham writes. “Around the world, we have seen that this is essential where Christians are a minority and are not protected. … Christians in Syria know that if the radicals overthrow Assad, there will be widespread persecution and wholesale slaughter of Christians.”

Graham’s father was a virulent anti-Communist in his early years; in 1949 he called communism “a religion that is inspired, directed, and motivated by the Devil himself who has declared war against Almighty God.” But as he took his message around the world, he softened his rhetoric on a host of issues, including politics and hot-button fronts in the culture wars.

“If I had it to do over again, I would avoid any semblance of involvement in partisan politics,” the elder Graham, now 95, wrote in his 1997 autobiography, “Just As I Am.”

Billy Graham toured the Moscow Synagogue during his 12-day visit to the Soviet Union on Sept. 15, 1984. RNS file photo

For years, Billy Graham sought to take his gospel behind the Iron Curtain, ultimately preaching to huge crowds in Moscow in 1982. At the time, Putin was a young agent in the KGB. “In fact, he was in charge of monitoring foreigners in Leningrad (now St. Petersburg) when my father preached there in 1984,” the younger Graham wrote. “If he was eavesdropping on our meeting, which I hope he was, he heard the Gospel!”

Michael Hamilton, who has studied the Graham legacy as a historian at Seattle Pacific University, said both father and son have been known to wade into controversy, but Franklin Graham responds differently.

“When the firestorm would hit, Billy Graham would always backtrack or walk back his comments in some way,” Hamilton said. “But when the firestorm hits Franklin, he doesn’t seem to really care.”

Hamilton also questioned why Franklin Graham — who has received wide praise for his relief work through his organization Samaritan’s Purse — didn’t approach Syria through the lens of “its enormous humanitarian crisis.”

A spokeswoman for the Billy Graham Evangelistic Association said Friday (March 14) that Franklin Graham was traveling and unavailable for comment. A statement from BGEA noted his article went to press before the current crisis in Ukraine that’s pitted Putin and Russia against the West.

“Franklin Graham consistently encourages Christians to be informed and take a stand for biblical values and biblical truth,” the statement said. “The Putin cover article was a way to provoke engagement of readers on this important issue and encourage further thought, prayer, and action.”

But Marianne Duddy-Burke, who heads the gay Catholic group DignityUSA and is a member of the National Religious Leadership Roundtable of gay-friendly religious groups, said she’s met with gay and lesbian Russians who have been beaten, stabbed and burned as Russia cracks down.

“It’s really disturbing when a religious leader seems to endorse laws that lead to this kind of behavior,” she said.

Previous BRIEF: Spiritual discussion to focus on “reading our own stories”
Next My beloved United Methodist Church: Working for change within the system