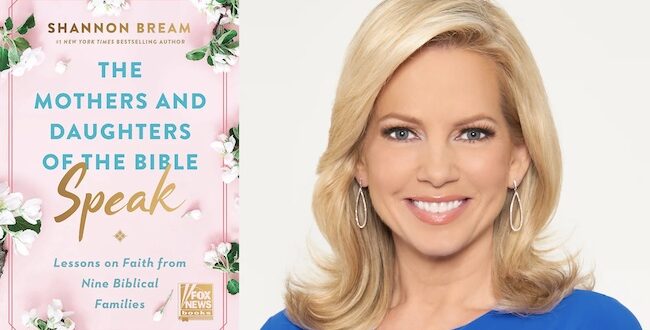 "The Mothers and Daughters of the Bible Speak" and author Shannon Bream. Courtesy images

Shannon Bream’s life might look charmed: The former beauty pageant winner has become an anchor of “Fox News at Night” and a bestselling author. But at the depths of her struggle with chronic pain, she said she began to think, “This is certainly not the Hallmark life, or even the average life. This is the ‘Lifetime life.’”

Having written on women in the Bible in last year’s “The Women of the Bible Speak,” Bream sought out these role models again, seeking comfort in lives that included trauma. She meditated on lesser-known stories of Dinah, who was the victim of rape, or Michal, who was used as a pawn both by her father, Saul, and her husband, David.

The result is her new book, “The Mothers and Daughters of the Bible Speak,” in which Bream examines the women’s difficulties through the lens of family. “Some of these families are beautiful and faithful and courageous, and other ones make terrible decisions and are very dysfunctional. It gives us a picture of the fact that God works through all of those circumstances.”

RNS spoke with Bream about these women’s stories, female agency in the Bible and whether God uses pain for a purpose. This interview has been edited for length and clarity.

The Bible’s women are princesses, refugees, mothers and warriors. What do you think the Bible tells us womanhood ought to look like?

That we are all created in God’s image, male and female, and every one of us has a different role. Sometimes the plans or dreams we have are very different than what God has planned, but I don’t think our lives are cookie-cutter. God uses male or female in any number of ways, as long as we’re willing to surrender to whatever his plan is. And that’s something that keeps me on my toes.

A frequent theme in your book is that God uses pain for a purpose. How have the Bible stories you’ve written about inform your own experience with chronic pain?

They are a gift to me. I talk about the woman in the New Testament who has this bleeding issue for 12 years. She’s expended everything she has and is no closer to a cure. There are times I very much have identified with her, when I went through a time of chronic illness and pain and it took a while to get diagnosed. It was very discouraging.

But the woman believed that if she could even just touch the hem of Christ’s garment, that would be enough to heal her. She breaks all the rules of the day — she shouldn’t have been leaving her house or been among crowds — but Christ immediately addresses her as a daughter and says, “Your faith has made you whole.” It’s a beautiful picture of his redemption of her, not condemnation.

How do you think about God’s purpose when confronting the realities of the sexual abuse that Dinah or Tamar, David’s daughter, experienced?

It’s an incredibly difficult question. People will ask how God can allow the suffering in Ukraine, or the cases that you mentioned. I trust that God is aware and he’s working through circumstances. Not that he delivers them or plans them, but that evil is running amok in this world, and those things are going to happen. When they do, I know that he can pull good from that. It takes that leap of faith, believing what it says in (the New Testament’s Letter to the Romans) that he’s working all things for good to those who love him and are called according to his purpose.

Dinah, the daughter of Leah and Jacob, isn’t a Sunday school regular. What lessons are you hoping readers draw from her story?

There are a lot of important things we can dig into there about how we can better reach out to and minister to men or women who have been victims of sexual violence. It’s a conversation we need to be comfortable having in the church. We need to be a place where people can find safety and they can find hope and healing from something so atrocious in their lives. It also walks us through vengeance and when it goes beyond the bounds of what God has done for us. So I’m hoping it sparks a conversation.

Stories like Dinah’s, Michal’s and Bathsheba’s highlight the limited agency of women in the Bible. Do you think the Bible is still ultimately an empowering book for women?

I do. We learn that through every one of those stories. When Jesus was walking the earth, he broke all kinds of conventions and cultural limitations on women. They were part of his ministry and his inner circle. We think about Mary learning at his feet — it wouldn’t have been the usual practice of the day for a woman to be studying so closely with this esteemed rabbi. At the tomb, women were the first to encounter him and then become evangelists. He went to women who were outcasts in society, women who were caught in adultery or the Samaritan woman. Jesus spent time with them, looked them in the eye and went to them to redeem them to make them seen and make them known. For those who feel like there is subjugation of women, Jesus upends all of those myths.

As I struggled to find a doctor to diagnose me, and lived in a haze of exhaustion and excruciating pain, I began to think, this is certainly not the Hallmark life, or even the average life. This is the “Lifetime life.” When a doctor finally diagnosed me, it was such an enormous relief, but in the end, he told me, there’s no cure for this. I remember getting to my car and just sobbing and feeling so overwhelmed. Like, Lord, how can this be the final answer? As I was praying, I remember feeling him say in my soul and in my heart, I will be with you. And that has always been enough. It wasn’t, ‘I’m going to heal you.’ But I am going to walk with you through this. And that presence has been unmistakable and very real to me.