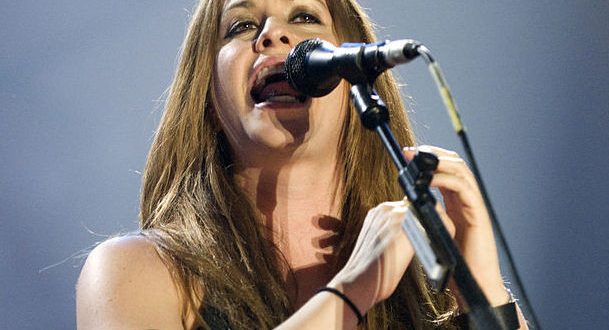 Alanis during a live concert in Barcelona, June 2008/Wikipedia photo by livepict.com

Share this story!
By Neal Schindler
Religious songs, whether found in prayerbooks and hymnals or released by faith-based record labels, may be musically and lyrically diverse but usually have one primary purpose: praising God. In contrast, secular songs about religion tend to do things that wouldn’t pass muster in a house of worship: assume God’s perspective, cast God as a villain, or just take a sardonic view of God’s relationship with humankind. Below are four of my favorite secular songs about faith.

Randy Newman is an American treasure. Long before he became super-famous for his “Toy Story” songs, he wrote a ton of deftly cynical, darkly humorous story-songs, of which “God’s Song” may be the best. I particularly love the stately version Newman recorded for his “Songbook” album. The leisurely pace as well as the buildup to the song’s twist ending highlight the intelligence of Newman’s lyrics. In the last verse, our assumptions about the seemingly sociopathic deity described thus far aren’t upended so much as turned 90 degrees. God may come across as a cackling sadist in Newman’s framework, but hey, at least he’s a sadist with needs. I’ve watched a lot of TV and movies and listened to a lot of music, but I don’t know if I’ve ever encountered a more harrowing depiction of God.

Not everyone likes Alanis Morissette; those who do tend to adhere to her breakout album, “Jagged Little Pill,” and summarily reject her subsequent excursions into New Age-y mystical wanderings. That said, Morissette’s song “Still,” from Kevin Smith’s unusual religious satire “Dogma,” is about the most positive portrayal of God I could imagine — a diametric contrast to Newman’s amoral, codependent Lord. Morissette’s God watches us, the human race, screw up in every conceivable way, but she never gives up on us. This is basically a list song, in which God names our sins specifically, reveals her nature, and assures us that no matter what we do, she loves us. Sample verse:

3. The Thermals, “Here’s Your Future”

This may be the rockin’est song about God I’ve ever heard. I am physiologically programmed to turn this up when it’s on. The Thermals are a pop-punk group from Portland who still come through Spokane from time to time. Their take on God is neither a terrifying condemnation (Newman) nor an uplifting song of praise (Morissette). “Here’s Your Future” presents a deity who’s simply going about the business of the Old and New Testaments. This God isn’t particularly personal, but neither is he some kind of uncaring, stone-hearted being. He has a to-do list — that’s for sure. I love the song’s opening, with the fraught sound of an organ and this perfect verse:

God reached his hand down from the sky
He flooded the land then he set it on fire
He said, “Fear me again. Know I’m your father.
Remember that no one can breathe underwater”

I might spend a considerable amount of time reading the Bible if the Thermals were willing to punkify the rest of it. (Maybe that’s why I like the musical “Godspell” so much: It’s intelligent and entertaining Bible-y goodness!) Here’s the song’s take on Jesus:

God told his son, “It’s time to come home
I promise you won’t have to die all alone
I need you to pay for the sins I create”
His son said, “I will, but Dad, I’m afraid”

Many Christians might argue with the theology of this — human sin isn’t something God creates but rather something we choose, they might say — but I love the simplicity of these lyrics, and Jesus’ straightforward response; he’ll do what needs to be done, but as any human would be, he’s terrified. That seems about right.

4. Stephen Schwartz, “All for the Best,” from the 1971 “Godspell” cast recording

A rollicking duet between Jesus and Judas (how often do I get to write that?), “All for the Best” is a little like “Still,” except that it enumerates varieties of human suffering rather than human sin. Its chorus reminds us that no matter what befalls us in this life, “…when you go to / Heaven you’ll be blessed / Yes, it’s all for the best.” It’s an exhilarating combination of faith in a glorious afterlife (Christian, New Testament) and sardonic kvetching about the trials we must endure in this one (Jewish, Old Testament). This may be the danciest theology you ever consume. Plus, banjo!

Join SpokaneFAVS for a Coffee Talk forum on “Faith and Music” at 10 a.m., May at The Community Building, 35 W. Main Ave.