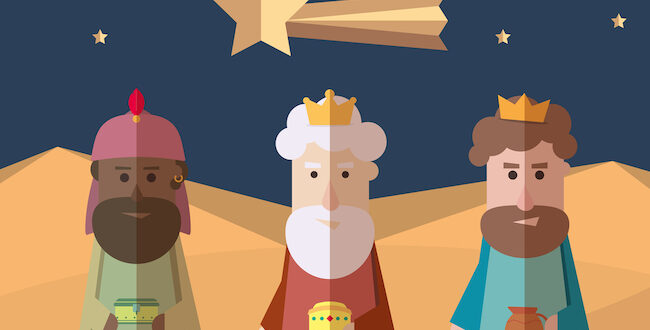 Image of magi by DepositPhoto

Phoebe and I are Godparents to a pair of boys (a pair of young men, I suppose, now) in Spokane. And a while back we decided to borrow a Godparenting practice from a friend. The friend’s practice was this: they had bought their Godchild a nativity set (i.e., a collection of those little figurines or action figures that commemorate Jesus’ birth) but, rather than delivering the set to the child all at once, they were gifting them a single figurine each year. So, one Christmas Joseph would appear in the mail. The next would see the arrival of Mary. And then Jesus himself. Gradually, over a decade or more, everyone would show up for Christmas.

We loved the idea. And so I bought a pair of nativity sets – one from Peru, in which the Holy Family is bundled up against the cold of the Andes, another from South Africa, in which the magi come to the manger playing drums – and we started our annual mailings. If I remember right, Baby Jesus made the journey first (thanks to the US Postal Service, he managed to get to Spokane without his parents). And then the next year another member of the Holy Family made the trip. And then the next still another.

It was all going according to plan.

Except that when we moved to our current home a few years back, both of the boys’ nativity sets went missing.

Losing stuff drives me to distraction. I totally empathize with the characters in Jesus’ stories who search for things. Just like the woman who loses the coin and the shepherd who loses the sheep, when my keys go missing it’s hard for me to do much except to search and mutter. It’s not just that I want to be able to lock my front door and start my car – although I do want to be able to do those things. It’s that I want to be aware of where my keys are. I want the control or certainty – or, at least, the illusion of control or certainty – that comes from knowing where my confounded keys are.

All of that is to say that the lost nativity sets kind of haunted me. Christmas came, and then went. And no figurine made its way to the boys.

And then a second Christmas came.

And then a third.

I felt like the world’s most flaky Godparent. And maybe even worse, the whole thing had the flavor of an unwelcome metaphor – a parable, even – in which the lost shepherds and angels and magi are unable to show up and do their duty and so Jesus has to begin his life with neither gold nor frankincense nor myrrh.

Sometimes, finding lost things has this almost revelatory quality. I will search and search fruitlessly. And then – abruptly, as though a slow-moving technician has finally turned on a synapse in one of the dustier corners of my brain – I will walk directly to the closet, reach into the pocket of a rarely worn jacket, and before my hand even closes around them I will know that I will find my keys within.

Finding the nativity sets was like that. Unlike the search for keys, which usually takes hours or sometimes days, this search took years. But the finding was the same. Yesterday, I went down to the basement, cracked open a closet, and sliced apart the packing tape on an ancient but familiar cardboard box.

I knew even before the box fell open that there would be sheep and shepherds waiting within. As daylight lit upon them for the first time in years, they looked up at me with unblinking eyes. If they were angry with me, they didn’t show it. They seemed entirely unperturbed within their bubble wrap.

I went directly from the closet to the post office, pausing only long enough to write a card to our Godsons.

This year, after a delay beyond their control, not one figurine but three will go to each of the boys in Spokane. This year, the journey will be made by the three magi together.

We’re hoping that they will make it in time for the Feast of the Epiphany.

I imagine the magi stepping out of their boxes in Spokane and stretching their stiff legs before making their way to Jesus. They will have quite a story to tell to him. And what better story to tell to Jesus than one that begins: I once was lost, but now I’m found.

Previous Ask An Eastern Orthodox Christian: What’s the difference between the Orthodox Church and the Catholic Church?
Next Spokane Gets a D From Human Rights Campaign, but Faith Communities Are Working to Make It Better