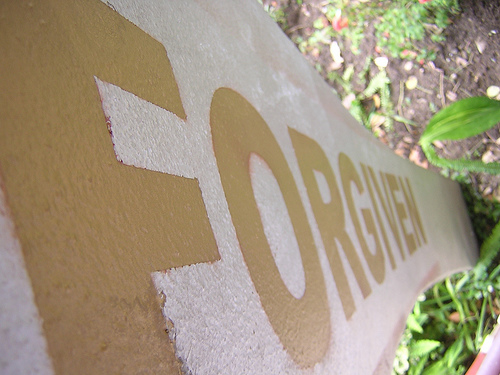 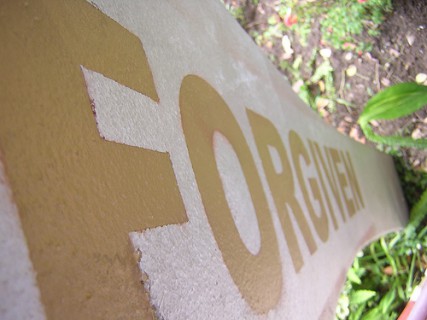 When I volunteered for this panel, writing an article on what forgiveness looks like seemed relatively easy. To my mild surprise, my thoughts on the matter deadlocked so that I ended up mired in writers block until my dog Winston was attacked by two other dogs. While I would have appreciated God using a less stressful situation as a kick starter, the incident forced me into the immediate arena of forgiveness. Since I knew and have spent considerable time with the aggressing dogs, I found it easy to forgive the attack. Aside from personal ties, I knew that animals are, at the end of the day, literally animals and don't seem to have the intellectual capacity humans have for intentional reason and rationality. Therefore their instinctive, reactionary nature is one that cannot be faulted. From a theological stance, I am assured that as people of God we are called to forgive much because we have been forgiven much. We are to be agents of forgiveness. And yet within these understandings I recognized an incomplete forgiveness. While I intellectually understood that I was to forgive the dogs, and even felt the forgiveness, I also felt anger and self-righteous judgment. When one of the assailants got an infection due to a bite Winston delivered in defense, I felt satisfaction and little sympathy. It was simple math for me. Having been physically abused growing up, I was sickened at the thought of Winston the Chihuahua-pug mix cornered by a Dalmatian-mix and a German-Shepard mix. Two against one. Goliath and Goliath against David, but David didn't have nearly the same pull this time around.

Years of American cultural nurturing had also in part persuaded me that the right idea of punishing the offender is to never forgive or forget. This makes suffering for our commitments difficult, for we expect Christ and/or others to protect us and not to knowingly or willfully expose us to harm, danger or opposition. Yet both instances continually occur so that our errant expectations lead to a never forgiving stance. And at the barest level, never forgiving sucks. The inability to move on from that static occurrence of trauma is not only personally excruciating, but more often than not, winds up projecting the same qualities of trauma that were received onto others. People who never forgive are incapable of offering grace to themselves and compassion to others. I forgave my mother for the traumatic aspects of my childhood and the relief was exponential. It helped that she made the first move and not only apologized but validated my worth with words I had been longing to hear my whole life. It also helped that I had a newfound understanding of the pressures this society unfairly burdens women with. Demanding they be mothers without compassionately understanding and thus forgiving the reality of people who aren't ever fully prepared for the birth of a child. Or that  don't want to be a parent. So who am I to say I would turn out any different from my mother? In forgiving her, I found myself wanting to live up to who she has been all along. All the traits she carries as a strong, intelligent, amazing and wonderful woman. I can't forget the wrongs that occurred but I have found that the tension between forgiving and the reality of never forgetting is important to exist within.

As a Christian I believe and have experienced God's redemption through trauma. As a constructivist, I hold to the philosophy that theories exist as a direct result of our construction of them. The tension between these two spaces is the same tension between forgiving and the reality of never forgetting. To suffer for what we didn't do is never easy. But it is harder for us  to be prepared to own responsibility for the wrong we ourselves have done. Are we defying the faulty categories ignorance or tradition keep encapsulating? Are we showing the world a vision of community in which there is no social, economic, racial, or gender division? Living into Galatians 3:28 and Colossians 3:10-11? Or are we merely serving as instigators of division? As a country, are we bent on upholding one static version of patriotism or are we learning to admit our bigotry and self-serving exclusionary politics? As a community, are we learning to forgive the murderer or are we insisting that their brand of injustice is an evil none of us are capable of?

In juxtaposing my childhood, four years in the Army that included a tour in Iraq in 2003, and the recent incident with my dog, I find very little difference between animals and ourselves. We might have reason and rationality, but when it comes down to it, we are instinctually fight or flight types. And there, but for the grace of God go I.

Forgiveness is the topic of our next Coffee Talk on July 6. Stembridge is a panelist.

Laura Stembridge is a graduate of Gonzaga University where she earned a degree in English Literature with a concentration in Women’s and Gender Studies.

Previous Jimmy in the lions den, or: a merry weekend of intelligent design lectures, part 2
Next TODAY – Coffee Talk: What does forgiveness look like?

‘the things of dog knoweth no man, but the spirit of dog’? There’s a pun in there somewhere, I know it…

Great write-up, Laura. You touched on one idea that I think is a really important part of forgiveness: recognizing our own fallibility. An occasion to forgive is also an occasion to practice humility and compassion, in recognizing that we all (dogs, humans and otherwise) make mistakes, and still need to be accepted and appreciated. Thanks for sharing that (and I hope Winston is recovering well!)

Laura, you touched on the one aspect of this topic that I would love to hear discussed tomorrow, that tension between forgiving and forgetting. I hear people say it time and again, “I will forgive but I will NEVER forget.” Sometimes with sadness, sometimes with heated passionate anger. Is there any chance of forgiveness in the latter? I would say no, but I want to hear from all of the panelists on this question. Thanks for framing it so well!