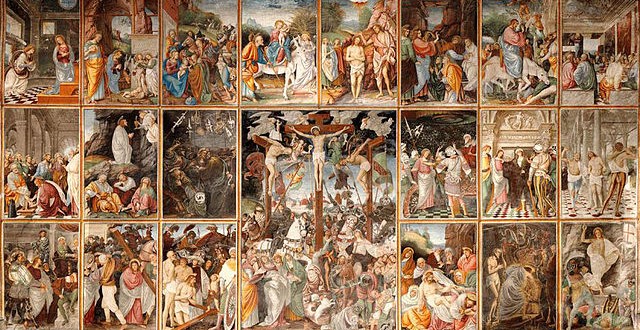 Life of Jesus by Gaudenzio Ferrari

Forget Santa Claus. Was there a Jesus Christ?

(RNS) As another Christmas approaches and the usual holiday laments are unpacked like so many old ornaments — too much commercialism and too little faith, too much food and too little time — there has always been one reassuring constant: The reason for the season is the birth of Jesus some 2,000 years ago.

Sure, you can debate exactly what year he was born, or whether it was December 25 or some other date, and if his crib was a manger or even if he was born in Bethlehem or another city. Fleshing out the scant biographical details of the historical Jesus has been a popular parlor game for centuries.

In the end, whatever version you believed, or disbelieved, Christmas — and Christianity — remained a fact of life because Christ was a real person.

An increasingly persistent line of argument is taking the quest for the historical Jesus in a whole different direction and claiming that we actually don’t know much about Jesus himself because, in fact, Jesus never existed.

Or, say the debunkers, even if there was a Jesus of Nazareth, he was an ordinary rabbi whose identity was essentially hijacked after his death to invent a divine messiah, Jesus Christ.

“There are clearly good reasons to doubt Jesus’ historical existence — if not to think it outright improbable,” Raphael Lataster, a lecturer in religious studies at the University of Sydney, wrote in a column published Friday (Dec. 19) in The Washington Post.

Lataster is the author of “There Was No Jesus, There Is No God,” one of a growing number of books and blog posts by Jesus “mythicists” who question the very existence of the man from Galilee.

“Jesus of Nazareth was nothing more than an urban (or desert) legend, likely an agglomeration of several evangelic and deluded rabbis who might have existed,” Michael B. Paulkovich, author of “No Meek Messiah,” wrote in an article last June in Free Inquiry magazine titled, “The Fable of the Christ.”

Other books in this genre include “Christ’s Ventriloquists” by Eric Zuesse (2012); “Proving History: Bayes’s Theorem and the Quest for the Historical Jesus” by Richard Carrier (2012); “Nailed: Ten Christian Myths That Show Jesus Never Existed at All” by David Fitzgerald (2010); “The Jesus Mysteries: Was the ‘Original Jesus’ a Pagan God?” by Timothy Freke and Peter Gandy (2001); and “Deconstructing Jesus” by Robert Price(2000).

Their thesis generally includes a number of arguments:

Needless to say, the vast majority of Bible scholars disagree with these arguments, whatever they think about Jesus as a religious figure. Yet the Jesus-as-myth meme is so persistent that many of them are publicly pushing back in order to debunk the debunkers.

Purdue University scholar Lawrence Mykytiuk, for example, has a lengthy feature story in the January/February 2015 issue of Biblical Archaeology Review that examines the extra-biblical sources — contemporary writers outside the New Testament — who attest to the existence of Jesus.

“As far as we know, no ancient person ever seriously argued that Jesus did not exist,” Mykytiuk writes, and he cites pagan and Jewish writers of the time who did affirm Jesus’ existence.

University of North Carolina’s Bart Ehrman, a leading New Testament scholar — and an evangelical-turned-agnostic who has no Christian ax to grind — grew so exasperated by the Jesus-hoax arguments that he wrote a detailed refutation in his 2012 book called “Did Jesus Exist?: The Historical Argument for Jesus of Nazareth.”

Believers and skeptics can argue with each other, and among themselves, about exactly who Jesus was and what he meant, Ehrman said in an interview. But arguing that Jesus did not exist “is such a ridiculous proposition.”

Ehrman said beyond the non-Christian references to Jesus from the era, scholars can plausibly trace elements in the Gospels to shortly after the time Jesus was killed. That fact, and the historical details in the Gospels, have convinced “virtually every scholar … in the Western world” that Jesus existed.

He also noted that while the Apostle Paul never met Jesus in the flesh — a point the Jesus deniers often make — in his many New Testament writings Paul mentions that he does know Jesus’ brother, James. “If Jesus didn’t exist, you’d think his brother would know about it!” Ehrman said with a laugh.

But to Ehrman, the most convincing argument that Jesus was a real person is that it would have made no sense to invent a crucified messiah because that is the opposite of what everyone was expecting at the time. In other words, it wasn’t a good sales pitch.

Besides, if Jesus was the product of a conspiracy, one would think that the conspirators would have gotten their stories straight and not have left lots of conflicting details.

Moreover, Ehrman said — contrary to the claims of the mythicists — there is no analogy in the pagan world of the time to a human being who was killed and rose from the dead and then exalted as a divine being.

So why do arguments that Jesus was a hoax persist?

For one thing, Ehrman said, “there are a lot of people who love conspiracy theories, and this is a brilliant one.”

The broader context, however, is the emergence of the assertive “New Atheists” who are both vocal and visible in seeking to criticize and undermine religion and to fight back against the culture warriors of the religious right.

A subset of those neo-atheists, as they are sometimes called, seems to want to take a shortcut in the fight against Christianity by arguing that Christ did not exist, thereby kicking the legs out from under the whole enterprise.

“I think the people who are taking that view are really shooting themselves in the foot,” Ehrman said. “If what they want to do is to counter Christianity, then they really ought to do it on some intellectually solid basis rather than arguing something that’s downright silly.”

Previous An Open Letter to my dear church members…Who don’t come to church
Next Protesting Torture: What’s in a sign?