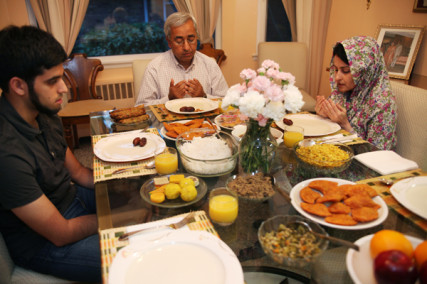 For some converts, Ramadan is the loneliest time of year

Since converting to Islam more than five years ago, Paul K. DeMelto of Cleveland has done all he could to become a more knowledgeable Muslim, attending a new converts class and hiring Arabic tutors to help him learn to read the Quran.

But despite his efforts, DeMelto found himself alone last Ramadan, the holiest month of the Muslim year, when adherents fast from sunrise to sunset and eat a communal meal at night.

As he looks to another Ramadan beginning Tuesday (July 9), DeMelto wonders if this might be the year when he finally lands an invitation to a fellow Muslim’s home for the iftar, the fast-breaking meal.

“The one thing that I expected to experience more fully in turning to Islam was engagement in a community,” said DeMelto, a 40-year-old baker.

Like many American converts to Islam, DeMelto changed his lifestyle, quit drinking alcohol, scaled back social ties with his drinking buddies, but still struggles to cultivate new Muslim friends. His isolation is particularly acute during Ramadan, when he feels like a Christian alone on Christmas.

Ramadan is the most social month of the Muslim year, a period of fellowship with family and friends over sometimes lavish evening meals. But many American converts to Islam break the daily fast alone, often in front of the TV set.

There can be consequences when “born” Muslims don’t reach out to new converts.

“I see how the new Muslims are kind of ignored,” said Vaqar Sharief, a former new Muslims coordinator for the Islamic Society of Delaware. “Many of them stop coming and they leave the religion.”

To be sure, Muslims are urged to focus on reading the Quran and reflecting on God during the monthlong fast, but even the most pious Muslims acknowledge the socializing that happens nightly strengthens bonds among Muslims and contributes to social cohesion.

“The concept of being together and uniting is something very important,” said Imam Talal Eid of Quincy, Mass. In fact, the Prophet Muhammad is reported to have said that any person who hosts an iftar for someone who has fasted will be forgiven his sins and blessed with other rewards.

Caroline Williams said her first impression of Islam was that it was a friendly and social religious faith.

“Part of what drew me in was how welcoming everybody was at the mosque,” said Williams, a 32-year-old New Orleans resident who converted in 2010.

Yet new and old converts said they lack a sense of belonging, and are left out at major holidays. The exclusion happens for many reasons. Sometimes it’s an oversight or a lack of knowledge about co-religionists who are lonely. Other times, ethnic cliques play a role.

“Being invited to private homes isn’t common, and can be the loneliest experience of all when people speak their native language, leaving us to read or stare at the ceiling,” said Nadja Adolf of Newark, Calif., who converted in 2001.

For Kelly Kaufman, the loneliness of her first Ramadan was driven home whenever she was asked by a fellow Muslim how she broke her fast the night before, and answered “Cocoa Puffs while watching ‘Seinfeld,’” or “chocolate cake and ice cream while playing with my cat.”

“It’s an incredibly lonely experience that I don’t think many people know about,” said Kaufman, who converted in 2010.

To help, she set up a website where Chicago-area converts and other Muslims can contact each other and post helpful articles about prayer, Arabic lessons, or Islamic dos and don’ts.

Some Muslims suggest that converts should go to mosques that hold communal iftar dinners and try to make friends there. In fact, many converts do attend mosque iftars, but still find it hard to form closer bonds.

“People are friendly, but I don’t feel like I’m family,” said Williams, who worships at Masjid Abu Bakr Al Siddique in New Orleans. She said she misses having the kind of close relationship that involves dinner invitations and long, deep talks.

A few mosques around the country have started to recognize the problem of convert isolation. The Islamic Society of Boston Cultural Center, the largest mosque in New England, holds monthly “Convert-sations” meetings.

Sharief and his wife hold classes at their Delaware mosque that teach new converts how to pray and other Islamic fundamentals. They are also conscientious enough to invite new Muslims to potlucks, volunteer and interfaith activities, and other mosque-related events. And once the couple moves into a new house, Sharief said they will hold the convert classes and other activities there.