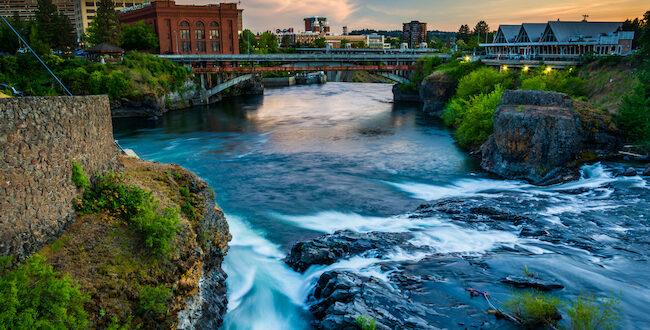 Spokane Falls and view of buildings in Spokane, Washington/DepositPhoto

A few months ago I was speaking to someone visiting Spokane from New Mexico. He told me he had moved away from the Southwest, but after a while found his way back there because he ached for the diversity New Mexico offered.

I grew up in Albuquerque but never thought of it as a diverse place. After he said that, though, I found myself reflecting on it and then googling my hometown.

I learned that New Mexico was named the sixth most diverse state in the U.S.

I thought back to my childhood there. So many of my peers at school were Native American. The family who lived next door was Hindu. My own grandma was Catholic.

Growing up I didn’t see any of this, because I was shielded from it. Religious diversity wasn’t considered a good thing in my home.

Only our beliefs were right, I was taught, and other religions should not be tolerated.

This extreme close-mindedness never sat well with me.

I’ve written before that all of this led me to a career in religion reporting.

By writing about other faiths for the past 20 years, I’ve learned about acceptance and have unlearned what I was taught growing up.

In my time on the religion beat I’ve been able to cover groups and events that have confirmed that gut feeling I had growing up, the one that said close-mindedness wasn’t right. My first time at a mosque, women lovingly surrounded me and guided me through the service. At the Sikh gudwara I was showered in hospitality and offered delicious food, at various churches I was enthusiastically greeted and welcomed. Each person I met showered me in such kindness because it’s what their faith taught them.

These people weren’t vile, like I was taught. They were compassionate and caring and genuine, and they enhanced the community.

When I moved here eight years ago, I wasn’t sure what to expect. On one hand, people said the Pacific Northwest was home of the ‘nones’ (n-o-n-e-s), people who didn’t practice any faith at all. On the other hand, on the surface, Spokane seemed to be very Christian. What I found, though, was that this place is home to a diverse religious community — and I feel in some way that I’m part of all of them.

We have two Sikh temples, a beautiful mosque, a vibrant Jewish community, six Buddhist communities and a mix of both conservative and liberal Christian churches.

I wonder where I would be today if I hadn’t become a religion reporter all those years ago. Would I still be in Albuquerque, shielding myself from all of you who worship differently than me?

Since I left the faith I grew up in, people always ask me what religion I practice.

And I struggle with the answer. I can’t seem to define my faith. I don’t believe in the Jesus I grew up with. Instead I believe in the Jesus my Episcopal and Congregational and Baha’i friends introduced me to. I believe in the Prophet Muhammad, and in the Buddha. Even the Hindu deity Sita can teach me about virtue. I can turn to the Tanakh to learn about atonement, and Guru Granth Sahib for lessons in compassion.

Each of these traditions has shaped me, and will continue to, as they’re all here in Spokane. I’m writing all this, inspired by the Spokane Friends Quaker Meeting. January is Peace Month in the Quaker tradition; this year they’re educating themselves “about other faiths so we can ‘walk cheerfully’ in our highly polarized culture and be outgoing and welcoming in our relationships with those of different faiths and cultures.”

I applaud them for going on this journey, and hope other congregations will follow their lead.