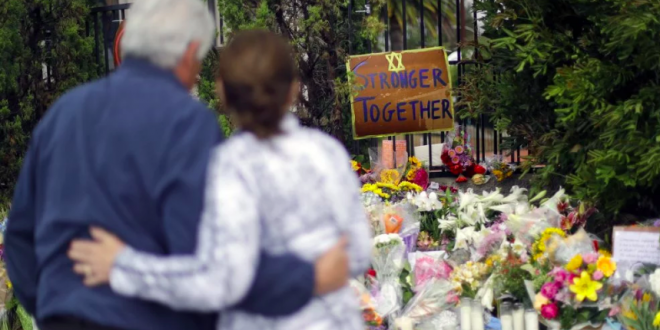 A couple embrace near a growing memorial across the street from the Chabad of Poway synagogue in Poway, Calif., on April 29, 2019. A gunman opened fire, killing one person, on April 27, 2019, as about 100 people were worshipping. The attack happened exactly six months after a mass shooting in a Pittsburgh synagogue. (AP Photo/Greg Bull)

For houses of worship, interfaith collaboration is the future of security

(RNS) — Last month, on the last day of Passover, a man armed with an AR-15-style rifle stormed into the Chabad of Poway synagogue in suburban San Diego and killed one worshipper and left three others injured. Later, the gunman reportedly confessed to burning a nearby mosque as well.

The attack came exactly six months to the day after 11 worshippers were killed at a Pittsburgh synagogue in the deadliest anti-Semitic attack America has ever seen.

But according to religious leaders, virtually no faith community has been spared violence – firebombings, mass shootings and more – over the past few years.

Poway and Pittsburgh were preceded by the 2017 attack on a church in Sutherland Springs, Texas, where 26 people were killed. The same year in Quebec City, Canada, six worshippers were killed at a mosque. In 2015, in Charleston, S.C., nine people were left dead at a black church. Six more were killed at a Sikh gurdwara in 2012 in Oak Creek, Wis. And far too many more.

In response, faith leaders across the country are putting their heads together to help protect their congregations — and to do so, they’re increasingly crossing denominational lines.

“It doesn’t matter what you call God or a higher power,” said Andy Jabbour, managing director of the Faith-Based Information Sharing and Analysis Organization in Leesburg, Va. “We all have a right to come together and worship, so we have to protect that right for all of us.”

Jabbour co-founded the nonprofit last year with the aim of forming a network of U.S. houses of worship and faith-based charities to equip them against security threats, from arson and active shooter situations to hacked emails.

“We’re a community, whether we’re one faith or another,” Jabbour said. “They might be targeting you today, but they might turn around and go to yours tomorrow. So we need to collaborate and exchange notes so we can share solutions.”

In Owings Mills, Md., more than 50 diverse faith leaders gathered this week to launch the new Interfaith Coalition of Greater Baltimore, which kicked off with a local summit on safety and security for faith-based organizations. There, civil rights advocates and local police offered bystander intervention training, advice on grant applications for security, and practical safety measures leaders can take to protect their organizations.

Within hours of the attack on the Poway synagogue, another alliance, the International Fellowship of Christians and Jews, launched a global effort to prepare synagogues for new threats of violence through interfaith cooperation.

“We want to make sure that every synagogue in the world is prepared to protect themselves against attacks like the ones we’ve seen recently,” said Yael Eckstein, president of the IFCJ. “We have been able to rely on our Christian friends again and again to step up and provide emergency assistance to Jews in need, including Holocaust survivors. Now we are asking them to help us in this effort to protect our communities from extremists who want to shatter our peace with their acts of terror.”

Because of grim historical realities, synagogues, African American churches and mosques have offered their experience to houses of worship that are just now beginning to wrestle with security issues.

“For a variety of really bad reasons, the Jewish community has developed a higher level or a greater focus on this than other communities,” said David Friedman, vice president of law enforcement and community security at the Anti-Defamation League, citing attempts by the Ku Klux Klan in the 1960s to target synagogues and black churches.

“Historically Jews have been acutely aware of our institutions as potential targets for extremists — on the right, on the left, international and domestic,” Friedman said. “So the Jewish community really has developed a considerable amount of expertise.”

“Jewish people and those of all faiths should not have to live in fear of going to their house of worship,” said Jonathan A. Greenblatt, CEO of the ADL, in a statement after the Poway shooting. “From Charleston to Pittsburgh to Oak Creek and from Christchurch to Sri Lanka, and now Poway, we need to say ‘enough is enough.’”

About 15 years ago, according to Friedman, the ADL began working with Latino organizations when they realized security techniques were not all that different from one minority group to another. After the Oak Creek shooting, sharing expertise with other faith groups became a major priority for the ADL.

“Making it possible for more institutions that are outside of the Jewish community to not have to go through the learning curve that we went through is very important to us,” Friedman said.

The ADL, which was founded in 1913 to fight anti-Semitism and all forms of hate, has spent decades guiding Jewish institutions on best practices for security. In 1981, responding to incidents directed against U.S. Jews, the ADL developed model legislation that would shape the first hate crime statute more than a decade later.

“From the outset, we’ve recognized that we can’t protect one group in a vacuum, that there always has to be consideration for everyone to be protected,” said Friedman.

After the 2015 Charleston church shooting, the ADL launched a campaign to protect minorities in every U.S. state with comprehensive hate crime legislation and produced a guide that adapted its recommendations for all faith-based and community institutions.

Muslims, too, have regular reminders to be aware of security. After the attack on two mosques in New Zealand in March, the Council on American-Islamic Relations distributed thousands of copies of its booklet on best practices for mosque safety to every mosque in the United States. Since the attack, hundreds of mosques have requested active shooter training.

CAIR recommends that mosques build on relationships with federal or local law enforcement, said Abbas Barzegar, the organization’s director of research and advocacy, even if those relationships are currently based on traffic control and parking arrangements, or if teaming with police means overcoming what Barzegar calls their “tense” history with the FBI.

“We’re finding that most mosques across the country are actually quite well prepared and have a lot of experience, especially after 9/11, if not before, dealing with questions of security,” Barzegar said. “So it’s just building upon what they already have, scaling up pre-existing security protocols and trying to allay community concerns.”

Ahead of the holy month of Ramadan, which began this week, the Muslim Public Affairs Council also invited faith leaders from many denominations to join a conference call on safety with local, state and federal government and law enforcement officials on May 2.

The call’s organizers stressed working with interfaith groups and other houses of worship to promote awareness of security, suggesting, for instance, that they invite other congregations to stand outside mosque entrances or attend prayer services to show solidarity.

One of the best resources for largely Arab and South Asian Muslim congregations has proven to be historically black mosques, which have been targets for decades.

“It’s often overlooked, but it’s the African American community that has paved the way for a lot of what Muslims are doing today, both in security and in community engagement,” Barzegar said. “They’ve dealt with racist attacks, inner-city violence and police surveillance for decades.”

For the first time this Ramadan, many mosques are hiring their own independent security forces or posting armed guards.

But by their nature, said Jabbour, houses of worship are “soft targets.” They often rely on part-time or volunteer staff to provide security, and they advertise their hours and openness to all comers.

And many faith communities have no intention of changing that.

In 2017, the Sikh Coalition worked with more than 60 of the country’s approximately 300 gurdwaras to improve security, from installing cameras to hiring consultants.

“Yes, we’re thinking about measures to better protect the community congregating in that space, but we also know that as part of our Sikh values, we believe in equality and selfless service for all of humanity,” Satjeet Kaur, executive director of the Sikh Coalition, said. “And part of that is having open doors.”

While a guide the coalition published notes Sikhs’ long tradition of defending their worship space, Sikh leaders emphasize that gurdwaras around the world offer free food and shelter to people of any background.

“Even in light of the risk that does exist, and given the incidents that have happened over the past years … Sikhs won’t give in to the fear and hate,” Kaur said.

Aysha Khan is the social media editor for RNS. She also reports on Muslim issues from Washington, D.C.

Previous Fear of school shooting is real, but can’t teach our kids to fear the world
Next For My Unborn Child: A Mother’s Day Reflection