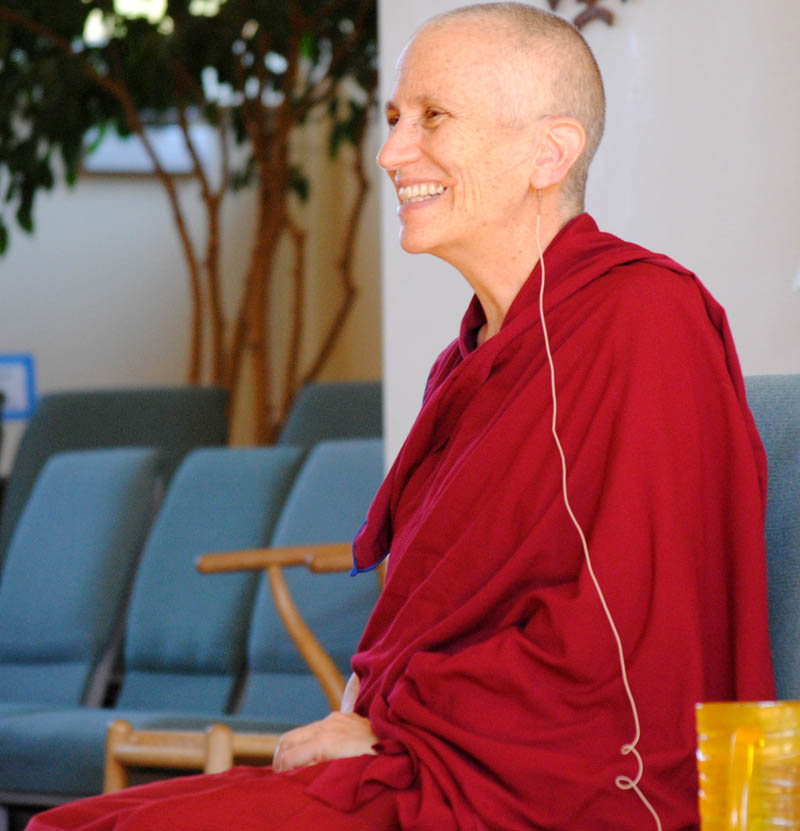 Ven. Thubten Chodron, a woman who has been central in in re-establishing the Bhikkhuni lineage, particularly in the West, said she was filled with spiritual questions growing up.

“Why am I here? What’s my purpose?” she wondered.

Nobody could give her a reasonable answer. Until, one day, she found herself participating in a Buddhist meditation course in Los Angeles.

Chodron, the abbess of Sravasti Abbey in Newport, shared the story of her journey into monastic life on Saturday at the Unitarian Universalist Church of Spokane as part of the Second Annual Bhikkhuni Day.

“Happiness and suffering comes from in here,” she said, pointing to herself, “not from out there.”

Comprehending that, she said, is when she really began to cherish the Tibetan Buddhist path — a path she’s been walking on for more than 30 years.

Chodron spent a decade as resident teacher at Dharma Friendship Foundation in Seattle, but had no monastic community to call her own. Founding the abbey in 2003 was a way for her to fulfill her dream of creating a Tibetan Buddhist community in the U.S, she said in a previous interview.

When she established the abbey in 2003, she was the only ordained nun living there. Today there are six nuns, called bikkhunis.

At the celebration Saturday, the other bikkhunis told their stories.

Ven. Thubten Samten, ordained in 2010, said she was raised in the Catholic Church, and since her mom was the church organist, spent a lot of time there. But it wasn’t for her.

She became an elementary school teacher in Canada, where she grew up, and thought spiritually she was “just going to be a professional lapsed Catholic.”

That changed, though, she said when she heard Chodron deliver a Dharma talk.

“It was like this surge of light got through this huge murk in my mind,” she said.

Samten attended a retreat, and later decided to spend a year in India studying Buddhism. Her decision to seek ordination became clear after that, she said.

Ven. Thubten Jigme, ordained in 2009, said monastic life has allowed her to do things she never thought possible.

“Being involved with a community that’s all going in the same direction…I’ve never been happier,” she said.

About 40 people attended the Bhikkhuni Day workshops, to show their support for the abbey and to learn more about Buddhism.

Chodron, in an address to the group, said everyone, monastics, non-monastics, Buddhists and non-Buddhists, need to work together to better the world.

“Society is only a group of individuals, and for society to change, individuals have to change,” she said. “We have a responsibility, and it’s a universal responsibility. Our lives are so intertwined; anything you think, say or do effects everyone.”

Part of the abbey’s mission is to, live simply, as the Buddha did and “offer a model for society at large, showing that ethical discipline contributes to a morally grounded society.”

For information on ordained Theravada women, visit the Alliance for Bhikkhunis website.

More photos from this story are available on our Facebook page.