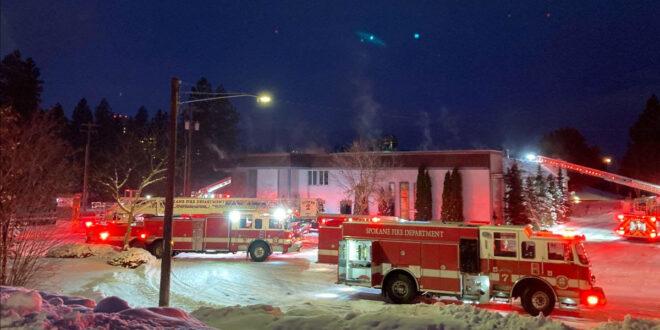 Rev. Heather Tadlock, the pastor of the church, said the fire started on the chancel in the sanctuary due to a circuit that had overloaded.

“The sanctuary fellowship area is pretty much a total loss and the rest of the building has smoke damage,” she said.

The fire reportedly started at 4 p.m. and was extinguished by Spokane firefighters at around 7 p.m.

Since the fire, Tadlock said they have received an outpouring of support from other congregations, especially Presbyterians, who have offered space.

Despite the damage, Tadlock said the building can be repaired and restored, but the congregation won’t be able to use it for several months.

Rev. Heather Tadlock said the fire reportedly started in the sanctuary on the stage area. It was reported at 4 p.m. and extinguished by 7 p.m.

The fire has been put out after 40 firefighters were called to the scene, and the church reported on its Facebook page that no one has been injured. The church is located at 2607 S. Ray St.

They will share more information when it becomes available.

“We’ve talked a lot in the last couple of years about how the church isn’t a building,” Tadlock said in a Facebook video.

The congregation is determining where it will continue its hybrid worship moving forward.

This is a developing story.