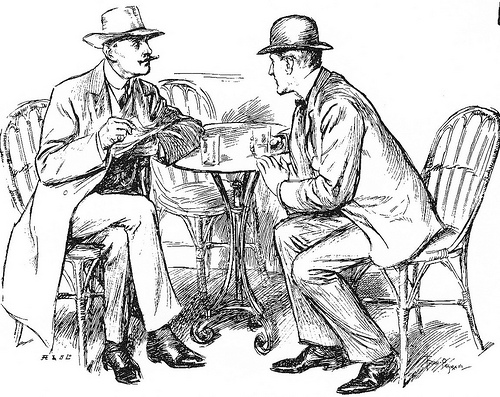 Finding wonder in each other’s stories

He came into the cleft of a rock, knowing he could only catch a glimpse of who passed before him. The rock of ages let him hide himself. The mystery remained. Moses had the Ten Commandments and a glance to fill his days with wonder.

When I was in seminary the latest ideas of evangelism were about story. Everyone had a story and we should learn and share with each other our story and hear others’ stories. The hope was that by providing a place of self-revelation bonds could formed and the Gospel shared. There was nothing sinister or manipulative in it, though there was a danger of this. It was mainly about adding muscles to relationships. I also think there was something too cozy about it, and something that was missing in the process. Too much like a math problem that only has one answer, relationship forming becomes a plugin application process. Sit for coffee and hear another story and share your own. The technique is, indeed, powerful and has lead me to many great conversations. It also led to some dirty laundry conversations, filled with my or others narcissism.

Robert Lowell, Sylvia Plath, and Anne Sexton led a poetry movement in which self confessional poetry brought an intimacy that was absent from the poetry of previous generations. Their poems, beautiful and tragic, force the readers to confront their own humanity. Self-confessional poetry also led to numerous journals, after numerous books, after numerous magazines, and even more journals filled with bad poetry telling the most naked confessions. Do we really need to know about other’s habits with toilet paper?

I have been wondering about the differences between self-revealing, sharing and connection, when I stumble on a post in the New Yorker about Moyra Davey’s video Les Goddesses. The video (above) is evocative for both what it shares and what it does not. We are not really sure who Moyra Davey is and the video raises more questions than it answers. We are left with a mystery that pulls us in wonder. Great art pulls into wonder.

When I think of my relationship with God, the father, Jesus and Holy Spirit, I am closest to God when I am filled with wonder. I know enough to engage God, but not enough posses or take for granted. I think the reason the ancient Hebrews were forbidden to pronounce the name of God, was because to name God was somehow to posses God, or to know God fully. In all relationships, including those to ourselves, to think you know is to possess. We enslave another (or ourselves) into our assumptions. Love grows cold in the metal bars of knowing.

I remember seeing couples who had been together a long time when I waited tables at restaurants. Some stopped talking to each other. Since they knew the others' story, there was not much to do talk about. They were brittle with each other and the possessed each other. Love had disappeared. Others seem to still be surprised by each other. They talk and created within their relationships. The time together was not a factor, some of the couples that had stop talking were married only a few years, while some of the couples that were still surprised by the other were together for 50 years or longer. Wonder had left some. Wonder stayed with others.

What is the connection between wonder and love? I wonder how relationships stay alive by engaging in wonder. Could relationships be resurrected by wonder? I wonder. I wonder if you understand what I am saying?

Provocative video and post–reminders that life is like a kaleidoscope. Perhaps our lack of wonder is a protection from the pain of not wanting to lose what he have right now.

I think you might be right Lace – we look away to protect ourselves.

Like your post Ernesto! In the tradition i practice with, this connection is expressed like this, “not knowing is most intimate”. i think wonder comes back pouring in, when we “empty the cup”.

Thank you Sicco. You have my curiosity up, what is your practice. Are their ways that let you empty the cup and cultivate wonder?

I love this! Actually I love everything you write. Sharing each other’s stories makes me think of real honesty and how valuable it is, because honesty is truth, and refusing to share it doesn’t bless anyone. Possessing God makes me think of having the humility to not assume we understand Him. Wonder, serving us well in our relationship to God, makes me think of innocence. There have been times when I have been very distressed at knowing too much about something. And other times when finding something new to discover and find wonder in, made life magical again! I have thought about wonder before, when I was surprised to hear it used to describe romantic love. I decided it comes from gratitude and amazement. Being grateful that you are able to experience that happiness in someone else, or feeling lucky to know them. I think gratitude is pure. Love can be selfish, but gratitude is holy.

Hi Ernesto. i practice in a Zen lineage (Diamond Sangha or community). One of the ways Zen practice has been helpful in my case (just to give one example that i can think of right now), in emptying the cup, or cultivating a “beginners-mind”, instead of an “expert mind”, is through actively engaged zazen (meditation) Periods of sitting meditation, alternated with walking meditation, alternated with working meditation, eating meditation, sleeping meditation, and so weaving this into all facets of daily life. In meditation, the thoughts, notions, assumptions, conditioning, and so forth, instead of holding on to them or feeding them, and letting these thoughts, stories, and often times tightly held self narratives, be in the foreground and dictate all the time. Giving them more concreteness, all this can be acknowledged, perhaps learned from, but then let go off like clouds in the sky, the clouds are also not attached to being clouds. This allows the self-concern to become smaller, and the world and wonder to come in more, like the dripping of rain, bird calling outside, fly wringing it’s feet, a expression on the persons face, each totally unique and unrepeatable, as well as the cries of the world. By not having this kind of fog or veil of constant thoughts sitting around oneself, the actuality of things, what might have been previously disregarded as “background noise” or in the way of this or that goal in the future, can now come to the foreground fresh and more intimate. Experiencing these things before the mind comes in and labels, analyzes and so forth. I like to think of it, as upgrading from narrow resolution, to high definition! In other words, i think we don’t necessarily resolve the full resolution of reality, due to the massive distractions and various “life sentences”, conditioning (which can be conditioning passed on by many previous generations as well). All this conditioning, some running towards the future, others regretting things about the past, distorts and separates from reality in the here and now, it’s like walking around with life-sentences (i am only this, or i am just that, is like putting on a self imposed straight jacket for life). We are also bombarded with stimulation all the time, so taking time out, and letting the thoughts and so forth settle, the same way murky water clears when given a chance to settle, brings in awareness of the stillness and radiance of the world. A clearer and more settled mind is much better able to perceive, understand, and see, feel with fresh eyes. Laura mentioned as well, a gratitude and amazement at this world starts coming up as one opens up and appreciates more fully what we have, instead of what is lacking. These are some of the practices from the wisdom tradition i participate in, this practice is several thousand years young, and so just like other wisdom traditions and faiths, there is much more involved to help in the maturing process, hopefully this gives some sense and perhaps you have similar practices?

I thought of something else! Idealizing. It is easy to be in awe of something if you idealize it. People seem to have a tendency to do that with something or someone they value. I think I’ve learned as I’ve gotten older to be wary and not think overly highly of anything, or anyone, lest it, or they, let me down. But I guess it is appropriate to be in awe of God’s creations, and of course, God Himself. And to avoid cynicism, to wonder at the good in things, while accepting that there might be bad too… ?

Thank you, Laura and Sicco. you have both given me a lot to wonder about.

Sicco, I submitted a post to answer you question. I hope it is posted.