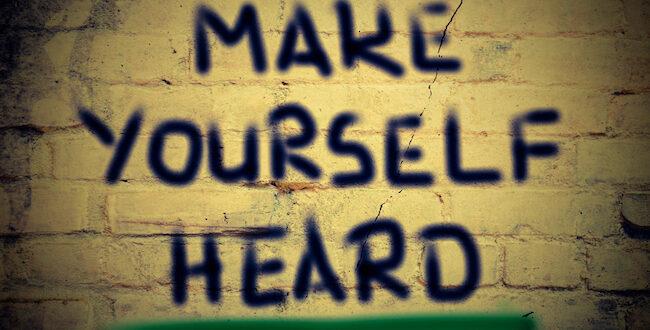 Make Yourself Heard Graphic by DepositPhoto

A few months ago I got an email from a producer asking if I’d be involved in her upcoming documentary series.

She was looking for people who had loved ones in a cult. The show, she explained, would tell stories of survivors and discuss resources people could turn to.

My immediate reaction was to help this producer by connecting her to people I knew who had gotten out of cults, particularly those who had written to me over the years about their previous involvement with the one I grew up in.

I quickly penned a letter, urging them to tell their stories.

Yet repeatedly, I was met with the same response: No.

They wanted the group exposed but still had family inside. Even though communication was strained and limited, they didn’t want to risk pushing those family members further away by talking publicly about it.

They hadn’t been entirely cut off yet.

At first I was frustrated. Couldn’t they see this was for the greater good? I wanted them to be brave.

Discouraged, I emailed the producer and told her my sources didn’t pan out.

That’s OK, she said. I was the one she wanted on the show.

It was easy for me to urge others to be courageous when I thought I was going to be behind the camera.

I was afraid too, I realized, but of something else.

I’ve shared my cult experience a lot: here in the Spokesman, in SpokaneFāVS, in the Wall Street Journal, in a TEDx Talk. Why was this so different?

I reminded myself that I have nothing to lose: I’ve already been outcast.

So I said yes to the producer but have continued pondering my fear.

For years I didn’t talk about the cult because, like the people I wrote to, I worried that speaking out would mean losing my mom.

Yet she still chose the cult. Even in my silence, I lost her, and when I did, I learned I could walk through fear – and find freedom.

Even though I was trembling, I began telling my story. I didn’t want anyone else to feel the pain of losing their mom, or any loved one, this way.

The people who I urged to be on this TV show haven’t felt this desertion yet, but they can see it in the distance. It’s true that arguing with cult members about their beliefs is a fast way to get cut off. I understand that fear.

But for me, that fear has come and gone, so what am I afraid of?

I’m worried about how the cult will respond – both to me and to the show.

Even though I left a long time ago, this group’s judgment still demoralizes me.

I grew up trying to live up to their expectations. Now, even in my banishment, I long for their approval, especially my mom’s.

There’s something innate about wanting to make a parent – a community – proud. I admit on a microlevel it’s a motivating factor in much that I do.

I know the only way to get their blessing is to rejoin them. My only choice is to push that wish aside and speak out in hopes that my voice stalls this group from doing more harm.

I know it will mean letting them down once again, but my silence would disappoint me more.

Previous Desmond Tutu: A Moral Giant for Civil Rights
Next To Challenge or Not to Challenge?