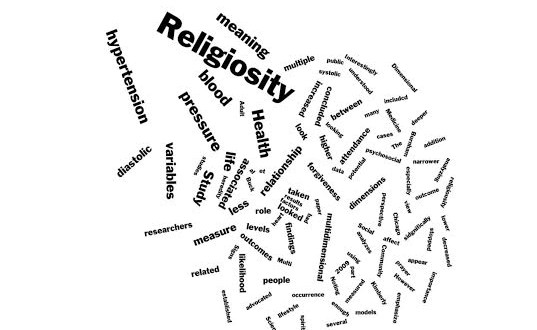 Noting that “Researchers have established the role of heredity and lifestyle in the occurrence of hypertension, but the potential role of psychosocial factors, especially religiosity, is less understood,” Buck et al in 2009 advocated for looking at religiosity from a multidimensional perspective.

Other studies have taken a narrower view of what is religiosity and concluded in many cases that higher levels of religiosity lead to higher levels of health. The results in the Social Science & Medicine Journal study were less clear, in part because they looked at more variables.

Signs of religiosity that were measured but were not significantly related to outcome included attendance and public participation. Interestingly enough, “prayer was associated with an increased likelihood of hypertension, and spirituality was associated with increased diastolic blood pressure.”

If researchers had stopped there they would have concluded religiosity is bad for your heart health but they looked deeper, saying “The addition of several other religiosity variables to the models did not appear to affect these findings. However, variables for meaning and forgiveness were associated with lower diastolic blood pressure and a decreased likelihood of hypertension outcomes. These findings emphasize the importance of analyzing religiosity as a multidimensional phenomenon,” from “An examination of the relationship between multiple dimensions of religiosity, blood pressure, and hypertension.”

If you were going to do a study of your own religiosity what are the variables you would look at? Some of the easiest to measure like number of hours or days of attendance per month seem less related to positive health outcomes.

This study also makes me wonder how we measure meaning and forgiveness. When I look at meaning in my own life, it is the people, my primary relationship, the children I care for, the clients I work with, the friends I walk with or see a move with who give meaning to my life. What I write and accomplish also gives meaning to my life. The people and experiences that are the most influential on my health are the hardest to quantify and measure. I do feel like life is getting better and better though.

Previous Muslim women in Los Angeles start a mosque of their own
Next What are we going to do about America’s money immorality problem?