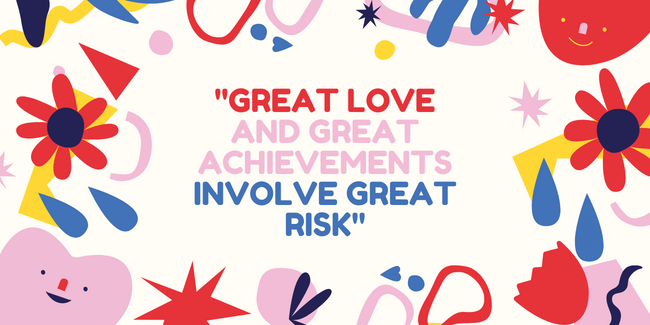 Taking a Risk for Love

Taking a Risk for Love

About this time last year I published a column on being single and turning 40.

I wrote that love is what I yearned for more than anything and that although I was scared of more birthdays passing without meeting my person, I was hopeful I’d find her.

The feedback I received from that article prompted me to take a risk. I sat down on my couch one night, unlocked my phone, and with shaky hands sent a message to the woman I’d had a six-month crush on, asking if she’d like to go on a date. (I was too nervous to call).

We joke now that we had been pre-dating for a half year before that by going on bike rides and hikes and dinners together.

That whole time I wanted to hold her hand and wrap her in my arms, but worried that confessing so would push her away.

I’ve always been hypersensitive to people turning away from me and couldn’t bear the thought of her potential rejection. It seemed safer living in the unknown. If she didn’t know about my feelings, our friendship wouldn’t be compromised, and we could keep spending time together.

I realized though, I was jeopardizing something bigger by remaining silent — a chance at love.

Our first date was to an outdoor Halloween party. She was Clark Kent and I was a park ranger. It was freezing out, but we found a patch of grass and, shivering, chatted and looked up at the night sky — even seeing a shooting star.

I wonder where my life would be now if it weren’t for that cold night, if I hadn’t taken a risk.

I wouldn’t be picking out bedroom lamps, or cooking for two, or planning holiday vacations to see her family.

Instead, I’d still be fighting off loneliness with long bike rides and Kindle books — both things I love, but no longer need to fill a void.

In my column last year I wrote, “The truth is that I have not been ready for her… I’ve been distracted and scathed until now. Psychotherapist Esther Perel said, ‘It’s not about finding the right person, it’s about being the right person.’ It’s taken me a long time to become the right person. Getting here has taken counseling and reflection and meditation and transformation.”

I’m still evolving and find myself turning to my faith to learn how to grow not only individually, but as a partner. I’m discovering the importance of mindfulness.

Meditation teacher Sharon Salzberg explains love in a way that to me is so pure, and so simple. She says it’s a connection that spontaneously arises when you gently attend to someone. And my partner and I do attend to one another. Whether we care for each other in big or small ways, it’s always meaningful and compassionate.

I don’t think it will be hard for us to maintain that connection. The gratitude I wake up with every morning is a reminder to me to pay attention to her, to listen, to communicate, to compromise, to hold hands, to kiss, to grow, to be open to what’s next together.

I took a risk, and found the love I’ve been forever searching for. No doubt there will be more chances to take in the future, but now it’s us taking them and not just me and no matter the outcome, we have each other.

Previous Should Christians believe the U.S. Constitution is divinely inspired?
Next Values Have Roots