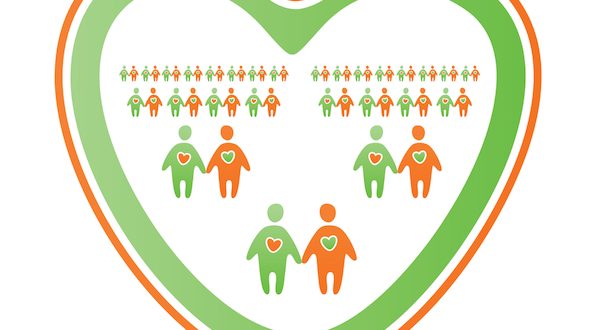 Finding Family Among the Strangers

The Torah parshat recently was Eikev, which contains the oft-quoted line, “You, too, shall love the stranger, for you were strangers in the land of Egypt. “ (Deuteronomy 10:19)

Over the past decade or so, it’s become very popular for Jewish leaders to lament the disconnect created by the Internet. High holiday services often contain at least one dvar that points out the horrors that can be committed anonymously online, warn of how our phones disconnect us to those around us, and plead with us to log off and stay connected to friends and family.

However, for some of us, the Internet reveals those we believed were strangers are actually family.

I love all things genealogy. I have an extensive family tree on one side (thanks in huge part to a genealogist cousin I’ve never met and only corresponded with via e-mail) and I’ve worked for a long time to research and build for other sides of the family. When DNA testing was introduced to the public, I was one of the first batch of people to try it. Through my family tree and DNA testing, I’ve found family I never knew existed and reconnected with family who grew up with my parents, grandparents, or great grandparents; but I only knew about through stories. It’s been absolutely amazing to discover how I’m connected to those strangers around me (and those far away).

I grew up hearing stories of my father’s summer adventures with his cousins. I never met them, but I knew those cousins, aunts, and uncles by name and could identify them in old photos. Thanks to those DNA tests and Facebook, I’m now connected to many of them.

Just this past year we discovered my mother worked in the same building as a cousin we had never met. I had no idea until I connected with that cousin through a DNA match. When I reached out to her, we were able to find where our trees overlapped. There’s a moment when you’re sorting through you list of family names and dates when you suddenly realize where that person fits. You find where yours and mine collide and suddenly that stranger becomes yours and those families become ours.

When I mentioned a family last name in a Facebook post, one of my husband’s friends commented that his family shared that surname as well. A look at our trees found his grandparents were actually in my tree. Our great grandparents were first cousins. This man has known my husband most of their lives.  This friend was in our wedding. He and I were cousins the whole time and had no idea until the Internet helped reveal our connection. He was then able to give me far more information on our family than I dreamed to find.

Just days later, a similar scene unfolded with my husband’s family. I have a friend I’ve known online for years. Although we originally lived far apart, she and I live near each other now and have gotten together to visit. When we moved, she was one of the first people we visited. Our kids have played together. When I found my husband’s paternal cousins on Facebook, I didn’t expect to see this friend of mine was a mutual friend. 6 degrees of Jewish separation is a very real thing, so I wasn’t too surprised.  Within the Jewish world, everyone knows someone else one way or another. There’s a good chance two Jewish people will know each other or at least know some of the same people. When I asked how she knew them, she revealed they were her cousins too. That was a shock. We found she and my husband actually attended the b’nei mitzvah of those cousins when they were teens. Another family connection was there all along, but I never would have known about without the Internet.

My maternal grandmother’s side of the family has been a complete mystery. My grandmother (obm) knew very little about her parents and my mother doesn’t remember her ever really speaking of them. Through research, I was able to piece together some information on their immigration and families. Through DNA matches and reaching out via messages online, I’ve been able to build my great grandmother’s side of the tree. I was startled to find a picture of my grandmother’s first cousin (obm) who looked so much like my grandmother that it shocked me. This was a picture of someone who I never would have discovered otherwise. She would have remained a stranger had not the Internet brought her face and her branch of the family tree to me.