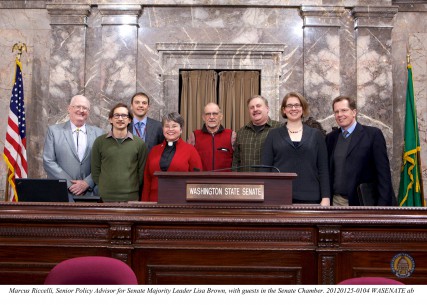 The bill could potentially create 40,000 jobs around the state and could generate about $100 million in taxes over the next three years.

However, some are worried the bill would negatively impact Spokane's bond rating.

On Friday the Spokane Alliance will hold a press conference to highlight the benefits of the bill and to urge state legislatures, “to stop playing politics.” The press conference will be held in front of Washington State University's future Riverpoint Biomedical and Health Science Center with City Council President Ben Stuckart and members of city council, labor unions, faith institutions, education associations, Associated General Contractors, WSU medical students and other organizations to collectively advocate for the bill.

Carol Krawcyzk, lead organizer for the Alliance, said the bill has become a faith issue because more people are reaching out to the church for financial help. “

The money that's coming into the church is less than it's ever been,” she said.

Since the Jobs Bill would provide jobs, she said fewer people would depend on the church for financial help.

The Rev. Andrea CastroLang of Westminster United Church for Christ has been invited to speak at the press conference. She said in Spokane the bill would bring the necessary $38.9 million to complete the Riverpoint Biomedical and Health Science Center and provide up to $25 million for CEEP (Community Energy Efficiency Programs), which helps support the Sustainable Works program created by the Spokane Alliance.

Previous Why do so many Christians spend time and money on false instruction based on the Book of Revelation?
Next On death and diapers