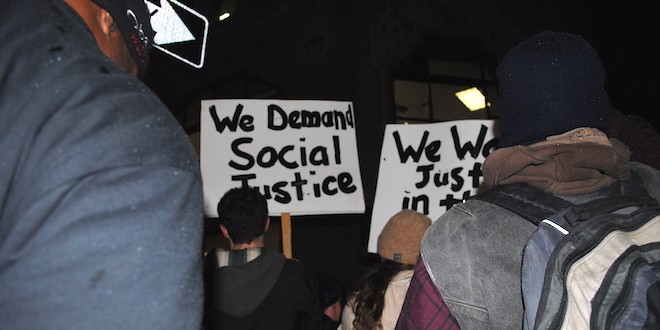 About 200 people paraded through downtown Spokane Tuesday evening, joining legions of other communities across the country in protesting the grand jury’s decision not to indict police officer Darren Wilson in the fatal shooting of Michael Brown.

Brown, who was unarmed, was killed by Wilson in August. The grand jury ruled on Monday night that there was not enough probable cause to indict Wilson in the shooting. The decision sparked another wave of protests across the U.S. and Canada. Nationally, protests have been ongoing since the shooting.

On Tuesday, the Spokane protestors waved signs that read, “Black lives matter” and belted, “No justice, no peace, no racist police!” as they made their way in the drizzle from City Hall to the Spokane Transit Authority Plaza and back.

She said today in America black people are more likely to be arrested, and even killed, by police than whites.

Doležal continued by saying it’s time to stand up to this injustice through freedom of expression.

The Spokane rally started with a “Die In” where a small group black men and women lay on the ground and had their bodies lined with chalk. After that, the crowd marched through the streets yelling “Hey, hey, ho, ho, the killer cops got to go,” and “Who’s Michael Brown? We’re Michael Brown,” among other chants.

Levi James, a 24-year-old from Spokane, joined in the protest. He said he’d been watching the Ferguson story since August. Seeing video footage of Monday night’s reactions unsettled him further, he said. Watching the police use tear gas and become militarized, James said, encouraged him to do something.

“Instead of arm chairing about it, I thought I could come down here and embody the feelings and emotions that I can’t even imagine the protestors in Ferguson were feeling last night,” he said.

He and others at the rally called for a change in police conduct. Some called for community policing, some pleaded for better training and others said police should learn to use stun guns rather than bullets.

The protestors remembered Brown, and others remember Otto Zehm, a mentally disabled man who died in 2006 during an altercation with Spokane police.

In a statement Brown’s family said they were “profoundly disappointed” that Wilson will not face charges. They continued, “while we understand that many others share our pain…we ask that you channel your frustration in ways that will make a positive change…We respectfully ask that you please keep your protests peaceful. Answering violence with violence is not the appropriate reaction.”

The Spokane protest was loud, but irenic, and continued outside City Hall after the march ended.