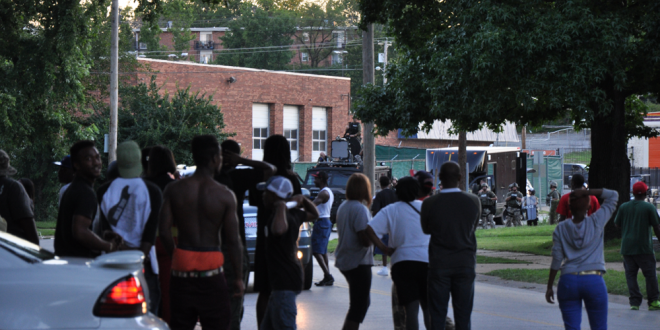 Ferguson and the Reality of Jesus

The reality of any talk of race for a Christian starts from the radical statement that Jesus became man to be with us. Meaning all humanistic tendencies to divide humans along ethnic, racial, economic, political subgroups or abilities are false for a Christian. St. Paul put it a better way in saying that in Christ there is neither Jew nor Gentile, Master or slave, neither female nor male, for all are one in Christ. All hierarchal divisions we place on each other are a result of our sins, both individual and corporate. Though we know that is not how the world works, we cannot wish it away. What to do as followers of Christ?

We must join God when he stands in the assemblies of gods and declares justice for the poor and weak. When we see blatant forms like we have witness in Ferguson, where a minority is targeted by the powerful for exploitation, we have to face the truth and call the system wicked. The numbers do not lie; more African-Americans are stopped for minor infractions than their white counterparts even if there is a higher likelihood of crime with the latter group. The money to run the city comes from targeting of the poor. The poor are systematically kept out of the power structures. The police look nothing like the majority and operate like an occupying force. We Christians have to rise to tell the gods of Mammon and Privilege they are mortals that will die. The father of Jesus will not stand for such evil.

This is not idealism. If only the world was like this stance, rather it is a call to live by following Jesus. As such, any division of humans such as racism, sexism and class divisions are, in a very real sense, a rejection of Jesus. We cannot serve Mammon and God, for all are in Christ, or we are one when we follow Jesus. Then any division based on current power structures within our society is a rejection of Christ. In Jesus, God became man and destroyed the hierarchies. He did not blur the differences, as they remain, but they all work within conjunction with each other. What are hierarchies but an appeal to original sin? To have one over the other is to play God over the other. It is to create an assembly of gods with Gods with names of power, success and money.

Following Jesus means to lose our senses of being gods and to be children of the most high God. We think somehow I am better than another because… fill in the blank with a whole host of elements like skin color, intelligence, money, gender, culture, and so on. Actually, Jesus gives the advice to think of others as better than oneself. Following Jesus means our differences are repurposed not to be a god over another, rather we put in service to love. To stand with the weak and powerless against those who think themselves gods. If I notice the race, culture or gender of another, I do not sin. But if I think that difference makes me better than the other, I reject the one who came to save through love. I reject the one who empties himself to be with us. The reason so many Christians stood up and walked with their oppressed brothers in Christ in the Freedom Walk 50 years ago was the recognition of sin in our midst. That sin remains, the sin born of a past that made men slaves by the point of a sword.

Of course, we Christians must know that we are in the world where hierarchies do exists and that other people do reject for all are one in Christ, even some who claim to be Christians. When confronting the wickedness of racism, we must follow Jesus and trust in loving all involved for even those cops that offend the Lord are oppressed by the system they serve. We stand for those who are oppressed in Mosul and in Ferguson. Those who don’t stand and demand justice and try to claim they follow Jesus, need listen to the Word of God found in Psalm 82:

“God has taken his place in the divine council;

in the midst of the gods he holds judgment:

“How long will you judge unjustly

and show partiality to the wicked? Selah

Give justice to the weak and the fatherless;

maintain the right of the afflicted and the destitute.

Rescue the weak and the needy;

deliver them from the hand of the wicked.”

They have neither knowledge nor understanding,

they walk about in darkness;

all the foundations of the earth are shaken.

sons of the Most High, all of you;

for you shall inherit all the nations!”

Join SpokaneFAVS for a Coffee Talk discussion on “Addressing Racism and Prejudices” at 10 a.m., Oct. 4 at Indaba Coffee Bar.