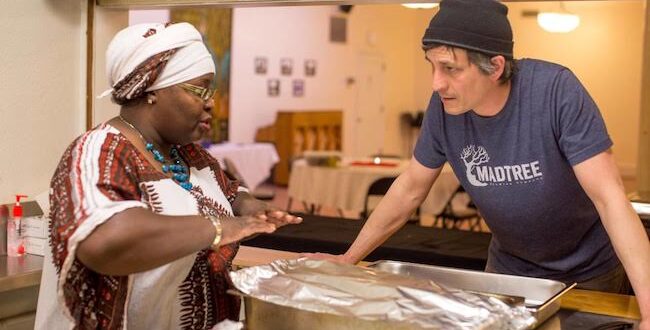 Feast World Kitchen, also known as Feast Collective, is self-described as “an incubator space to empower immigrant chefs,” according to its website. It offers dishes multiple nights a week prepared by a community of former immigrant and refugee chefs.

The restaurant is located on 3rd and Cedar Street downtown. Right now, the food is only available for takeout, but the company dreams of turning the dining room into “a hub for cross-cultural community.”

Beyond adding to Spokane’s culinary diversity, Feast is focused on the development of people and relationships, said Feast co-founder and executive director, Ross Carper.

“Our vision is for every immigrant and former refugee living among us to experience welcome and inclusion from the greater Spokane community and to have the opportunity to achieve their fullest potential as a diverse group of entrepreneurs,” according to its website.

Each week, the chefs rotate. When it’s not their featured night, they can work on building their brands and business through private catering and exposure. Feast also supports the chefs by providing startup funds and connecting them with trainers.

“Several of our chefs have taken big steps and gotten licenses and permits so that they are poised to launch their own independent business, when the time is right…whether that’s a catering company or mobile [food truck] or restaurant of some sort,” Carper said.

Feast recently launched a small business program, which helps members develop their career, connections and job and language skills, Carper said. The program includes monthly workshops and one-on-one meetings. It was inspired by similar organizations around the country and tailored specifically to Feast’s community of former refugees and immigrants.

“Sometimes there can be barriers between those communities and the rest of the Spokane community,” Carper said. “So, the idea is to literally come together around the table.”

However, not all of the former refugees and immigrants who work with Feast plan on opening their own catering business. Many members work for the maintenance and operations of Feast, such as the facilities and custodial services.

Feast World Kitchen welcomes volunteers from all beliefs and worldviews. Many of its members are Muslim or don’t follow any religion.

As well, the church had an English development school in the 60’s called Barton English School. It was operated completely by volunteers and allowed the church to make connections with immigrants and refugees in Spokane, part of the inspiration for Feast.

Feast works with other churches, like Common Well on the South Hill, and the local Presbytery, which provided funding from the national Presbyterian Church.

World Relief and Whitworth University’s Office of Church Engagement have been supportive in the process. They inspire Feast to have the difficult conversations surrounding immigration and equity in Spokane, Carper said.

“I feel called to [Feast],” Carper said, describing its community as a family. “For me, it’s [an] expression of faith, even though it’s not technically a church or a non-profit.”

Carper and Dan Todd founded Feast when they were each running their own restaurants and getting to know former refugees. They understand the difficulty of starting life in a new place and want to support and connect people in that process.

“A lot of immigrants and refugees, they want to communicate with American culture. But, most of them [are] feeling shy, and they just need someone to push them to the right place,” said Maisa Abudayha, one of the previous featured chefs.

Carper said Feast is still developing its programs and relationships. There are a variety of volunteer opportunities for anyone who is interested.

“I know what it’s like to take pride in something and try really hard to create something that other people will enjoy,” Carper said. “And, it’s just really fun when you can share something you love with the rest of the community, and that’s really empowering…I love to see families succeed in that way.”

For more information about the chefs or the weekly menu, go to https://www.feastworldkitchen.org/.

Cambria Pilger is a senior at Whitworth University, studying journalism and mass media communication, with minors in Spanish and business. She is a proud Colorado native, freelance writer and residence life intern at school. Beyond her career, Cambria is passionate about exploring, learning new skills, making art, playing video games and getting to know people.

Previous Ask A Hindu: Brahman and Other Gods
Next Can Peace-Making Include Protests?