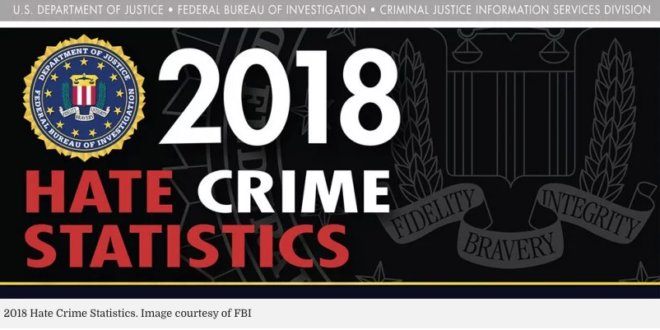 Hate crimes motivated by religious bias accounted for 1,550 offenses, and the majority of those — 57.8% — were anti-Jewish.

“It is unacceptable that Jews and Jewish institutions continue to be at the center of religion-based hate crime attacks,” said Jonathan Greenblatt, CEO of the Anti-Defamation League, which publishes its own annual “Audit of Anti-Semitic Incidents.” “We need to take concrete action to address and combat this significant problem.”

Religious-based hate crimes were the second-largest category after race and accounted for nearly one in five (18.6%) of all single-bias incidents. (Sexual orientation bias accounted for 16.9% of hate crimes.)

There were 24 hate crime murders in 2018, the highest since the FBI began tracking and reporting on hate crimes in 1991. Mostly that is a result of the Tree of Life synagogue massacre in Pittsburgh last October in which 11 Jews were killed by an alleged anti-Semitic shooter.

Jews make up about 2% of the U.S. population.

“The fact that such a small percentage of the population has such a large percentage of hate crime incidents, that should be worrying for all of us,” said Ira Forman, former State Department anti-Semitism envoy from 2013 to 2017 and now senior adviser on anti-Semitism to Human Rights First.

“You see numbers like this or worse in European countries like in France, where hate-crimes against Jews are way out of proportion to the population of Jews in France, about 500,000 people,” he added.

Still, he cautioned that the report is only one data point.

“The unrelenting scourge of hate crime requires an improved, more coordinated response from federal, state and local officials,” said Maya Berry, executive director of the Arab American Institute, which noted in a press release that there were 82 anti-Arab hate crime incidents in 2018. “We also need Congress to exercise its oversight and legislative authorities to address the systemic issues that undermine hate crime reporting and data collection in this country, beginning with the passage of the Khalid Jabara and Heather Heyer NO HATE Act.”