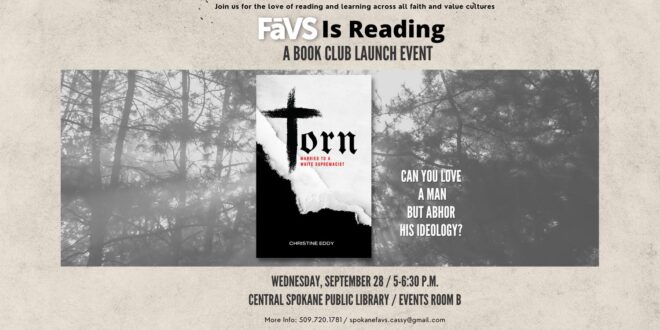 “Torn: Married to a White Supremacist” is the true story of one woman’s struggle to protect her family, of her determination to survive and her ultimate triumph over hate.

When Spokane businesswoman Marie Eddy steps to the podium Sept. 28 at the downtown Central Public Library in Spokane, Wash., she will present her mother’s story hosted by SpokaneFāVS’ FāVS Is Reading book club.

“Torn: Married to a White Supremacist” is the first-person account of Marie’s mother Christine Eddy, a Spokane librarian who for more than 27 years was married to and lived with a white supremacist in Sandpoint, Idaho.

Tracy Simmons, SpokaneFāVS’ executive editor, wrote about the family and the book’s launch in early July for the www.spokanefavs.com, and the story went national.

“I couldn’t put this book down, and I think everyone should read it,” said Simmons. “’Torn’ gives us an inside look at what it’s like to love someone whose values and beliefs we despise. Reading this book, and hearing from Marie, will give insights into understanding and compassion — and that’s an important part of what FāVS is all about.”

The event will be held from 5-6:30 p.m. in Event Room B at Spokane’s Central library. It will include a reading from the book, an interview with Eddy and then a question and answer period with the audience.

Books will be available for sale that night and more information about the FāVS Is Reading book club discussion schedule will be presented.

“Torn” was written late in Christine’s life, long after her husband’s passing, and in narrative form traces their journey as husband and wife, and later as a family, from southern California into the woods of North Idaho, and for Robert Eddy, into a descending cycle of racial hatred.

Christine worked hard to finish the book before her passing in 2018. But ultimately it was left to her daughter Marie to carry the mantle. In the years since she has worked to assemble the elements of the book and get it published to honor her mother’s life and legacy.

“She overcame her shame and fear, and she was brave enough to finally tell the truth about her life behind those doors,” said Marie. “Not many people have that kind of strength, and I am deeply proud of her and this book.”

Especially now, in a nation struggling with rising tides of white supremacy, hate and division, “Torn” resonates deeply, as a personal story of endurance, of family bonds shattered, and ultimately of one woman’s determination to choose love and light over division and hatred.

FāVS Is Reading began in 2021, and they read two books that year and hosted special events for both their readers and others who wanted to participate in those discussions.

First was “The Book of Joy” by His Holiness the Dalai Lama and Archbishop Desmond Tutu with Douglas Abrams, and FāVS hosted special guests Venerable Thubten Semkye of Sravasti Abbey and Bishop Gretchen Rehberg of the Episcopal Diocese of Spokane to discuss the book.

The second book was Gerette Buglion’s “Everyday Cult,” and FāVS hosted the author for a special discussion about the process of writing her book and being involved in a cult for most of her adult life.

“Torn” will be their third book, and all are welcome to participate.