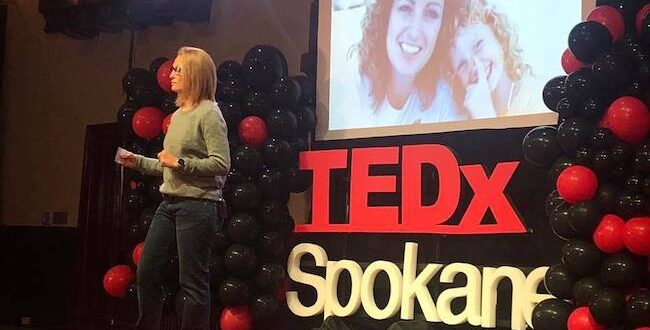 Tracy Simmons on the TedX Spokane stage/Photo by Bryce Brewer

Tracy Simmons is no stranger to cults. In fact, she grew up in one but didn’t know it at the time. Many others didn’t know it either as it was something her neighbors next door could not easily detect.

This is the subject of her upcoming virtual TEDxSpokane 2020 talk on Saturday.

“I decided to share my story because I think it’s something a lot of people can relate to,” said Simmons. “Cults aren’t always these big, extreme, dramatic things that turn into a Netflix series. Sometimes cults are right in our own neighborhoods, and if we don’t care for those among us who are vulnerable and hurting, they become easy prey for spiritual abusers.”

She joins five other speakers for the night, all under the overarching theme for this year’s talk, “Seeds of Community.”

Her talk comes about a year after Simmons published her column, “I Left the Cult Next Door,” which also touches on her experience growing up in a cult, in the Wall Street Journal.

According to her bio on the program, Simmons “wants to normalize the cult experience. She hopes to ‘shed the shame that come from it (cults).’”

Currently she teaches Journalism at Washington State University and serves as the executive director and editor of SpokaneFAVS.com, a digital journalism start-up covering religion news and commentary in Spokane.

She is also the executive director for Spokane’s FāVS Center, Washington state’s only interfaith community center. She also writes for the Religion News Service and is a reporter and columnist for the Spokesman-Review.

For more information about this year’s TEDxSpokane  event or how to purchase a “virtual” ticket, visit tedxspokane.com.

Previous Is Retribution a Christian Value?
Next The president’s health and basic civility

[…] There you will find 68063 more Infos: spokanefavs.com/favs-editor-tracy-simmons-speaks-on-the-cult-next-door-at-upcoming-virtual-tedxspokane/ […]

[…] we wrote about before, Tracy Simmons is no stranger to cults, and now anyone can watch her TEDxSpokane […]