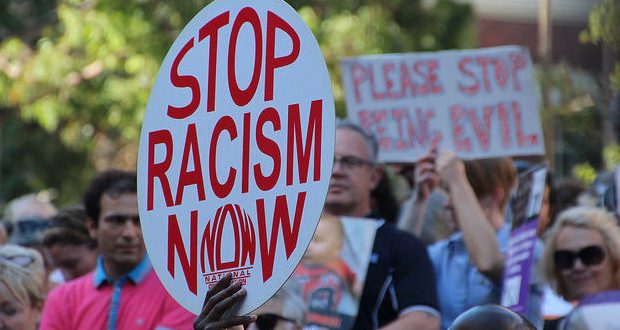 Why are people racist?

It depends what you mean by racism.

My sense is that, in most conversations, we use the term “racism” in order to describe a personal character flaw, an individual moral failing, sometimes even a deep and staining indictment of a particular human being. (I commend to you the brilliant TED Talk by Jay Smooth on this very subject.) And there certainly are folks out there for whom this definition is appropriate. Indeed, there are even some folks who are willing to claim the category or title of “racist” for themselves, people who make no effort to spin their actions or their attitudes as in any way tolerant or inclusive. Here are the young men getting fashy haircuts and marching through the streets with swastikas.

Why do these people behave as they do? Well, I suspect, Carol, that these folks act in this fashion because doing so promises them a heroic story, an outlet for their pain, and seductively simple explanation of reality: if racism is a justifiable response to a threat to their families and to their way of life, then being a racist is no longer in contradiction with being a good and decent person, but rather it is the very evidence of being good and decent and even bold.

I suspect as well that the new fascists are engaging in a perverse expression of a desire that, in and of itself, is universal and good: the desire to know that we are special, that we are loved. However, the great and tragic error of racism – of hatred and tribalism in general – is the conviction that for us to be special and chosen other people must be unspecial and unchosen.

This is a philosophy or a theology in which love is mistaken for a finite resource.

What’s critical to understand, Carol, is that this kind of racism – what we might call explicit racism – doesn’t exist on its own. As my friend Nathan puts it, carrying a torch and making the “Heil Hitler” sign is the Super Bowl of racism: you have to practice being a racist in many ways, small and large, you have to encounter a lot of racism, before you can make it to the big game.

And that brings us to a second definition or understanding of racism, to the one employed by most anti-racism educators, in which we understand racism not through a personal lens but, rather, through a structural or an institutional model. In such a model, racism is a broken – or, more accurately, a rigged – system into which we are born. If we are white, we benefit from the system in a thousand and one ways that, generally speaking, we don’t even notice. If we are a person of color, we are impeded by the system in a thousand and one ways that we cannot help but notice.

The writer, Rebecca Solnit, likens a racist system to being out on the ocean. For white folks, the current is virtually always running in the direction that we want to paddle. (If you aren’t into the water, Carol, imagine running or riding a bike with the wind at your back.) When we are first out on the waves, it feels like a wonderful gift to be able to move through the world with so little effort. But after a while, we just start to take the current for granted, we begin to figure that it is good and normal and obvious that we move through the world more easily and more quickly than other people. We stop thinking about it. Maybe we even imagine that we earned the easy speed with which we move.

Periodically, white folks do notice the current pushing us ahead. Speaking for myself, that current becomes apparent when I pass the houses under construction near my home and notice that they are overwhelmingly built by brown people but, subsequently, overwhelmingly lived in by white people; when I read the article that illustrates the enormous wealth gap between white and black Americans – and how white folks wildly and persistently underestimate that gap; when I speak to colleagues and friends of color and I am reminded anew that there is a direct connection between my pale skin and my history of positive interactions with the police.

For most white folks, this occasional noticing is pretty uncomfortable.

And we don’t know what to do with that.

If the institutional or structural model is correct – and I am convinced, Carol, that it is – then the answer to your question is that people are racist because a racist system made us that way, and that it is making us that way still.

The inescapable follow-up question is:

What are we going to do about it?

One possibility, to track back to where we started, is to become explicit racists, to start wearing Nazi armbands. That’s a totally immoral strategy, but it does have the advantage of erasing any tension between a racist system and ourselves. A second possibility is to sink into a defeated apathy – this is the standard strategy for a lot of us – whereby we feel vaguely ashamed of the current that pushes us along but otherwise do nothing.

I hope, Carol, that we can do better than either of those choices.

If we are white, we might begin resisting racism, as Courtney Ariel says, by listening more and talking less, by taking seriously the stories of people of color, by believing our neighbors when they tell us that the young men with the bad haircuts marching in the streets didn’t come out of nowhere, that they are but the foam on top of a current that has been pushing against brown bodies for a long time.

And no matter what our skin color may be, we can tell a better, more freeing, more just, and more loving story. The video of Jagmeet Singh’s responding to the heckler a few weeks back went viral in large part because Singh borrowed a page from the Ghandi Playbook and responded to the heckler with a story about love. There are more than a few similar stories to be found in scripture. Maybe we could start, Carol, with that really famous yarn that we call the Good Samaritan, in which a guy who looks different and acts different than Jesus’ friends somehow turns out to be the hero of Jesus’ tale.