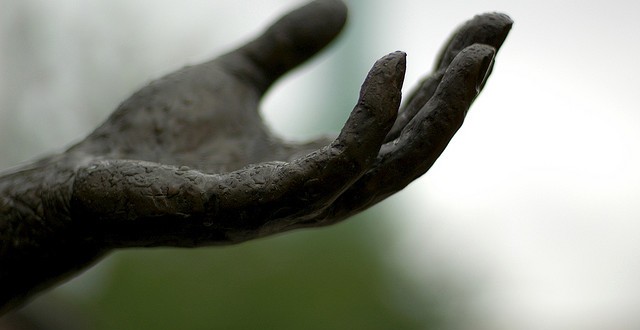 Father Knows Best: “Only the suffering God can help”

Dietrich Bonhoeffer said, “Only the suffering God can help.” OK, let’s try this idea on for size. Let’s say a friend of mine gets cut by a kitchen knife. It’s not, therefore, a good idea for me to help him stop the bleeding. No. The best way for me to help would be for me to cut myself, too, so the two of us can bleed all over the place.

One of the architects of early childhood intervention program, Circle of Security, is Kent Hoffman. In creating Circle of Security, Hoffman and his colleagues were seeking to help nurture what they call “attachment security” between parents and children – that is to say, a context in which a child feels safe enough and well supported enough and loved enough to freely explore her environment and, therefore, to grow and to learn. The list of awards and accolades that Circle of Security has received gets longer with every passing year; the positive and generative outcomes that it yields in family’s lives are extraordinary.

Should you get the privilege of hearing Hoffman speak, you will hear him return to one theme over and over again. It is the theme of what some researchers call “resonance” (a metaphor drawn from the way that one musical instrument will sometimes begin to “sing” in response to the vibration of another), what others call “communion,” and what Hoffman himself calls “soothing at the core.” Hoffman illustrates resonance by showing a film captured by researchers of a mother interacting with her infant. The researchers expected to see the child’s facial expressions mirror the mother’s, and indeed they did. But they were surprised to observe the opposite in the film as well, surprised to see that the mother reflected her child’s joy and sadness back to her. Without ever employing words, the mother was able to say to her child, “I know what you are going through. And I am with you.”

Resonance, in other words, is vital to us. And, more than that, nurturing resonance in others is part of our job as human beings.

Now, what about your hypothetical friend and his hypothetical cut hand? Should you also cut your hand in order to resonate with his experience? For that matter, if your friend gets laid off should you ask your boss to fire you? If your friend gets divorced, should you ask your own partner to break your heart? Well, I don’t know about you, Simon, but I don’t need to do any of that stuff: I’ve already cut my hand (multiple times while cutting multiple bagels over the years); I’ve already been laid off (twice); I’ve already had my heart broken (I’ve lost count of that one). You and I don’t need to seek out suffering, Simon. You and I already have the experience that we need in order to say to our friends, “I know what you are going through. And I am with you.”

Even when we don’t have a precisely analogous experience, we can still engage in resonance. There is a way to find communion with people with cancer even if we have never had cancer ourselves. There is a way to find communion with parents grieving the loss of a child even if we have never endured a grief so enormous ourselves. We can be present, we can listen, we can draw on our own history of loss and love. We can empathize. If that were not the case, none of us would be able to sit with the dying – after all, we haven’t personally died.

And what about the second part of your scenario? Should you engage in resonance instead of first aid? No. Thinking back to the times when I cut my hand, what I wanted was resonance and first aid. Over the years, the medical professionals who have done the most to help me to heal were the ones who were really good at cleaning my wounds and who also acknowledged just how much those wounds hurt.

Bonhoeffer (and if you haven’t read about him, Simon, I encourage you to do so – he is one of the under-acknowledged heroes of the 20th Century) was committed to resonance and to first aid. He made the decision to return to Nazi Germany in order to stand in solidarity with his fellow citizens and also in order to participate in the resistance. It was a decision that ended up costing him his life.

The words that you quote, therefore, are not Bonhoeffer’s ode to passivity. They are, rather, his acknowledgment that what I’ve been calling first aid – and what we might simply call action – has its limits. There are times, especially when we are facing the end of our lives, whether that be from illness or injury or, in Bonhoeffer’s case, from execution, when resonance is all that remains. What Bonhoeffer knew, and what he proclaimed through those brief words, is what the mystics across history have known: God is the very fount of resonance. Indeed, we might try shortening that sentence and, riffing on 1John 4:8, simply say this: God is resonance.

Even as Bonhoeffer mounted the gallows, God climbed the steps with him. Those who witnessed Bonhoeffer’s execution later recalled that he was possessed of a profound bravery and a profound composure. We may imagine that, even as the rope was placed around his neck, he remembered Jesus on the cross – the resonant suffering of God that, in that moment, was the only thing that could help. We may imagine that God whispered to him and said, “I know what you are going through. And I am with you.”

Previous The need for interfaith support in times of threat
Next Meet Matthew Sewell, our Catholic writer