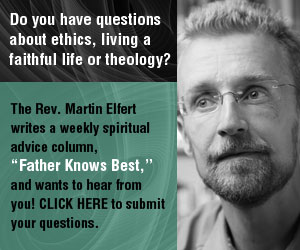 Father Knows Best: How did this column come about?

What’s the backstory behind your column’s title, “Father Knows Best”? 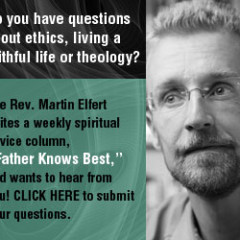 Much like Batman, Wolverine, and Buffy the Vampire Slayer, FKB has an origin story. Today, it will be revealed for the first time. It goes like this:

A while back there was a short-lived Christian advice column. I don’t remember lots about it, but I do recall one particular question and its answer. A reader wrote in to express her anxiety. She said that she loved her child more than she loved God, and she wanted to know: is that wrong?

As I read that question, I started speculating about what the columnist’s response would be and, indeed, I started formulating my own answer. I guess that I expected the response to involve reassurance: I expected that the columnist would say that love doesn’t work that way, that it isn’t a finite resource. (Remember the old song about the magic penny?) And maybe I expected her to mention the Gospel; to say that, if we take Jesus seriously when he says that whoever welcomes a child also welcomes him, then maybe our deep love for our children is not something that competes with our love for God but, rather, is actually part of our love for God.

The columnist’s actual response? Yes, she wrote, the reader was wrong to love her child so much. Instead of sending the reader away with reassurance, the columnist sent her away with wheelbarrow full of shame.

Two thoughts came into my head, one right after the other. First, I thought, “Gosh, I wish that there was an advice column from a Christian perspective that was more compassionate than this, that was more generous than this. A column that was predicated on the assumption that 1John is right and God really is love. Someone should write a column like that.”

And then I thought, “It seems to me, Martin, that you’re ‘Someone.’”

It wasn’t a whole lot later that Tracy Simmons and I started talking about creating an advice column for SpokaneFAVS. The prospective column didn’t have a title, so I did that thing that we do in the second decade of the 21st century: I crowdsourced. I told my friends that I was looking for a name that was playful without being totally irreverent. The suggestions were fabulous —“Sunday Morning Quarterback” and “Wonderful Counselor” both stick in my mind. But there was little question that we had found our winner when my friend Lauren Bacon, her tongue planted thoroughly in her cheek, came up with “Father Knows Best.”

There is, ACR, something fundamentally presumptuous about writing an advice column; telling strangers to dump their boyfriends or change their careers or stand up to their parents is a serious act of hubris. So, it strikes me as appropriate that this column should have a presumptuous title. Throw into the mix the long and storied association between the priesthood and pomposity and the fact that nobody actually calls me “Father” (the three people in this world who might legitimately employ that honorific plain old call me “Dad”) and, well, I’ll venture that Lauren pretty much got FKB’s name perfect.

And that is how it all began. I’ve been fighting crime ± or at least dispensing advice — ever since.

Previous Book of Mormon coming to Spokane in August
Next Is emotional contagion the same as theological covenant? Not on your private or public life