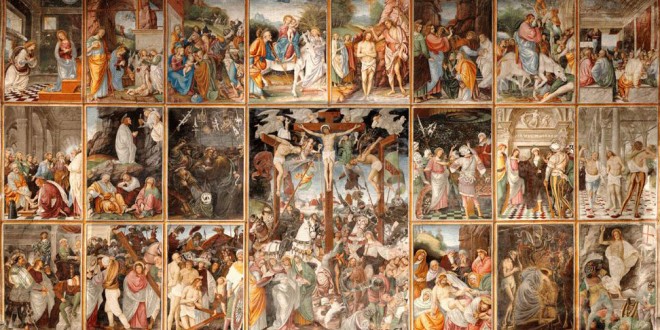 Story of Jesus by Gaudenzio Ferrari

Father Knows Best: Do you think the Gospels were editorialized?

Two weeks back, I advised Anthony — a young man who doesn’t like to dance and who likes his girlfriend’s interest in dancing even less — to go hit the dance floor. My friend Ken wrote me with a great piece of additional advice for Anthony: before you go, take a hip-hop class.

I spent a lot of years saying, “I can’t sing.” And then I started practicing singing. And what do you know? I found out that I actually have a voice. I suspect that a lot of us who say, “I can’t dance,” might be stuck in a similar place. If we actually practiced dancing, who knows what kind of moves we might discover?

And now, this week’s question:

Do you think the Gospels were editorialized?

While there are substantial commonalities between the four Gospels, the authors of each had a set of themes about who Jesus was (and who Jesus is) that they were especially interested in emphasizing. The examples of those themes are numerous — exploring even a few of them is the project of a book rather than a 700-word column – so I’ll confine myself to a brief “for instance.” It’s a “for instance” that we find right at the beginning: Jesus’ birth narrative.

For Luke, by contrast, one of the really important things for us to know about Jesus’ birth and early life is that this time announced that God is to be found in the most unexpected of places and among the most unexpected of people. Thus, the first few chapters of Luke establish what some scholars call a “counter-narrative” to the story that we expect to hear. We expect a king to be born into luxury: the newborn Jesus sleeps a manger, an old-school word that basically means “trough.” We expect the news of a king to be announced in court: it is announced to peasants caring for livestock. We expect wisdom to be found with well-trained elders: it is found in a 12-year-old boy.

Mark figures that the important news about Jesus begins when Jesus is a grown-up, and so the second Gospel has no birth narrative at all. And John is similar — the fourth Gospel looks to the time before Jesus’ adulthood only long enough to proclaim that the Word that became flesh in Jesus was with God since the very beginning.

There are lots of opportunities, Tad, to explore more about how each of the Gospels tells the story of Jesus. An old but still really cool resource is what is variously called a “harmony” or a “synopsis.” This is a book in which similar passages from one or more of the Gospels are printed in columns beside one another. A synopsis allows you to easily look at the different word choices that each of the authors makes, the different details that each adds or subtracts. And it allows you to easily find the elements that are unique to a given Gospel.

An even better way of learning is to take a class. If you live near a seminary or a university with a Biblical Studies department, go and enroll in “Introduction to the New Testament.” I bet that you will learn a bunch about Jesus. And I bet that you will be inspired by the extraordinary work that the authors of the Gospels did in editing Jesus’ story and passing it on to us.