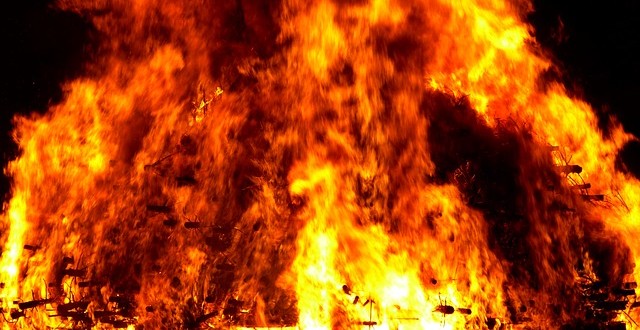 Father Knows Best: Do You Believe in Hell?

Hey Readers!
I’ve hit the big time! I’m on Popping Collars, a new podcast about the intersection of religion and pop culture. You can hear me talk about “Breaking Bad” with my friends Greg Knight and Elizabeth Easton here.

Do you believe in hell?

I don’t just believe in hell: I’ve seen it. I bet that you have as well.

If you have ever had the privilege of participating in an Alcoholic Anonymous meeting, you will have heard stories from hell. Here are testimonies to lives shattered by a pathological relationship with drink. Just about every alcoholic I know who has found sobriety has done so only after hitting what the 12-Step tradition calls rock bottom, that place of despair and loneliness that comes when the alcoholic realizes that she has come to prefer booze to being in good health, to being married, to driving sober, to being gainfully employed, and maybe even to being alive. Rock bottom is another name for hell.

If you know someone who has ended his or her own life — if you have contemplated suicide yourself — you will have heard stories from hell. Here are examples of lives in which joy and agency and meaning and healing and all of the other things that God most hopes for us have come to seem impossible. Here are examples of lives so permeated with exhaustion that death appears to promise the kind of rest that the individual can imagine finding nowhere else. Suicide is another name for hell.

So yes, Dale, I believe in hell. What I don’t believe is that there is any part of hell beyond which God is unwilling or unable to reach us.

As I recently heard a theologian argue, the popular understanding of hell isn’t something that we learned about from the Bible. Rather, it is something that we learned about from Dante. “Inferno” is a classic of literature and a brilliant work of imagination — the circles of hell, in which the evil spend eternity enduring poetic comeuppance for their transgressions, are as clever and captivating as anything that JK Rowling or CS Lewis ever envisioned. But allowing Dante to shape our thinking about what God permits to happen to us after we die is dangerous. Such thinking makes our vision of God into something small and pathetic.

When we argue that there are circumstances in which hell can become permanent and irrevocable for anyone, we are also, by necessity, arguing that God’s power is limited or that God’s willingness to heal and reconcile and forgive is limited. Now, I don’t know about you, Dale, but I’m not prepared to argue either of those things. Jesus tells us to forgive 77 times (or, depending on your translation, seventy times seven times), and he uses that great big number in more or less the same way that a child might use the number “gazillion.” “Seventy-seven times” means “infinite.”

Jesus, in other words, tells us to forgive without limitation. I don’t believe that Jesus is holding you and me to a higher standard than he is holding the God whom he calls father.

God’s invitation into joy is relentless. Before I became a Christian, I said “no” to God a whole lot of times. But God’s enthusiasm for calling me never diminished. I have no reason to believe that it ever would have diminished, no matter how much time passed. Even if we keep on saying “no” into our 50s or 70s or 90s, God keeps on calling. Even if we say “no” on our deathbeds, God keeps on calling. The love of God never stops.

Here’s the hard part, Dale. While we may like the idea that God never tires of calling you and me, most of us don’t like the idea that God keeps on calling other people. Is it fair that you and I should go to church every Sunday and yet have no less and no more of God’s love than the most hostile of atheists? Is it fair (and it’s pretty much impossible to talk about hell without Hitler coming up, so let’s name him now) that someone should commit the grossest kind of evil and still be held in God’s love?

This divine unfairness is what Jesus is getting at when he tells us the parable of the workers in the vineyard, all of whom get paid the same wage no matter when they began their work. Some of us begin the work of saying “yes” to the meaning, healing, and belonging that God offers to us when we are children. Some of us, like me, don’t say “yes” until we are adults. And some of us don’t say “yes” until after we die. Many of us spend a bunch of time in hell — a hell that may have come to us through no fault of our own or a hell that we may have chosen.

Previous Most Americans are clueless about Sikhs
Next In Washington state, a Tibetan Buddhist nun blazes a trail for other women to follow