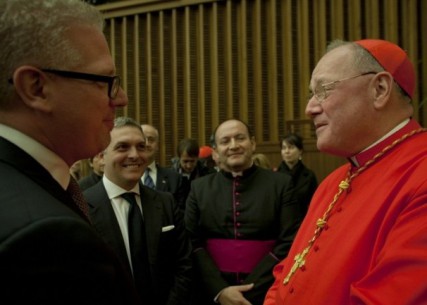 Lent started a couple days early for the ESPN editor who wrote a headline about Knicks phenom Jeremy Lin that recalled an ethnic slur against Chinese. Anthony Federico, 28,was fired on Sunday for the gaffe, which he said had no racist intent. “ESPN did what they had to do,” said Federico who, like Lin, is a devout Christian. “My faith is my life,” Federico told The Daily News. “I'd love to tell Jeremy what happened and explain that this was an honest mistake.”

Speaking of J-Lin,his pastor tells the WaPo what he's really like. It's all good, don't worry. New York archbishop Timothy Dolan, who was the “rock star” of the Vatican consistory that created 22 new cardinals, may need a bit of self-denial: he fell off the diet wagon while in Rome, and now can't take off the new gold ring

Previous Hundreds of Buddhists gather in downtown Spokane
Next Dehumanizing the outsiders, elderly, disabled and poor