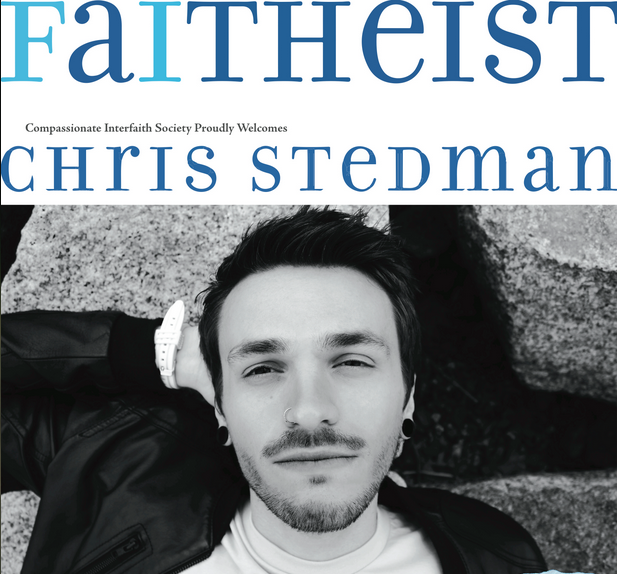 “Faitheist” author coming to EWU, urges Atheists and believers to work together

Chris Stedman thinks Atheists and believers have some key things in common and should start working together to improve society.

He writes about this in his book, “Faitheist: How an Atheist Found Common Ground with the Religious” and will discuss it further on April 29 at Eastern Washington University, where he’ll spend the day visiting with students and community members about the importance of interfaith work.

“It’s unheard of for someone with no faith to work with the interfaith community,” said Ayesha Malik, president of EWU’s Compassionate Interfaith Society. “We need to bridge the growing divide between Atheists and believers. If Atheists don’t participate, we can’t make a pluralistic world.”

Stedman, who serves as the assistant humanist chaplain and the Values in Action coordinator at Harvard University, said it starts by working with college students and millennials.

“They value diversity, dialogue and are very interested in learning about their neighbors,” he said. “Millienials are generally primed to transform the way in which people view and approach religious differences.”

His visit to EWU will begin with a 10 a.m. lecture at the JFK Auditorium titled, “How a Queer Atheist Found Common Ground with the Religious.” Then, at noon in Hargreaves Hall, will be a book reading and signing. He’ll conclude at 3 p.m., also in Hargreaves, with an interactive workshop, “Atheists and Humanist Community & Social Justice,” where he’ll discuss ways Atheists can build community with people of faith.

He said these conversations are especially needed in places like the Pacific Northwest, where the bulk of residents have no religious affiliation. According to the American Religious Identification Survey, released in 2009, one quarter of Washington and Oregon residents don’t claim a religion.

However, the majority of this group, known as the nones, still believes in a God or universal spirit, Stedman noted.

“So engaging with the religious unaffiliated brings to life what they do believe. In the Pacific Northwest, even though a significant number of people are religiously unaffiliated or non religious, I think that sort of means it’s that much more important for them to understand the religious people living in their midst,” he said.

He acknowledges that theists and non-theists have some things to work on, as the two groups may have an unresolved anger toward one another. The solution, he said, is in relationship building.

“One of the real values in this on-the-ground, grassroots interfaith dialogue is that it humanizes different groups,” Stedman said. “Relationships are transformative.”

Once the two groups are able to get past their differences they can focus on their commonalities, he said. Both strive for social justice, want to help others and desire to live meaningful lives, he said.

Thomas J. Brown, president of the Spokane Secular Society, said he agrees that the religious and non-religious can, and should, work together.

“There is a clear and present need for community service of all kinds, and it’s silly to ignore that churches are doing some real good and affecting change; particularly on a local level,” he said. “If we try to work against or compete with the existing (and often better-funded) religiously-based social programs, we will struggle to achieve our goals, and we will likely under-serve those we seek to help.”

The Spokane Secular Society, known as S3, has a tradition of handing out water during Bloomsday, checking buttons on First Night and collecting money each month to give to a local non profit.

“From the big issues like social justice, down to the small stuff like participating in community events, both theists and non-theists have a desire to make Spokane the best possible place to live. Surely we can accomplish those goals more swiftly and with greater effect if we work together,” Brown said.

Details on Stedman’s visit to Eastern can be found here.

Good News Monday: A Pastor, a Rabbi and a Mullah Walk Into a Bar | True Stories

[…] Crazy dude, I know. He even wrote a book about it, called “Faitheist: How a Queer Atheist Found Common Ground with the Religious”, and travels around giving speeches about his views and efforts. More about Chris and his work here. […]

Good News Monday: A Pastor, a Rabbi and a Mullah Walk Into a Bar | True Stories with Gill

[…] Crazy dude, I know. He even wrote a book about it, called “Faitheist: How a Queer Atheist Found Common Ground with the Religious”, and travels around giving speeches about his views and efforts. More about Chris and his work here. […]