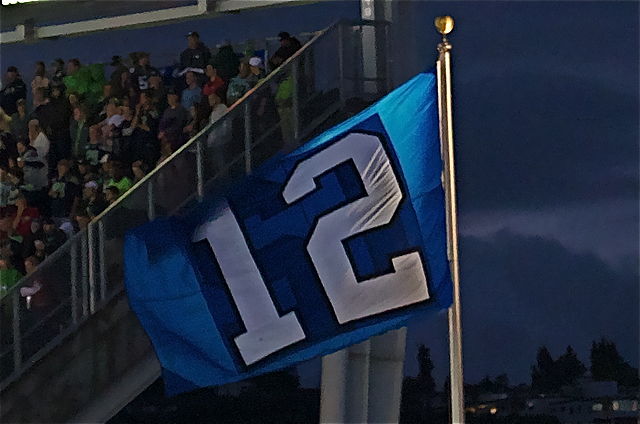 This photo was taken of the 12th Man flag during a Seattle Seahawks game. Photo by SeahawkScreamer/Wikipedia

Last week, Mayor David Condon did something strange. The 12th man flag, an emblem of the Seahawk fan base, was hung from the clock tower in Riverfront Park. It might just be me, but there seems to be a lot more Seahawk fans this year than previous years. Friends—who I had no idea were football fans— have been wearing jerseys to work, and all around town. “This is my team!” they explain to me. “They’re doing really good this year, and we should support them.” Support them when they’re doing well? What about the years of support they may have needed when they weren’t doing well? Who supported them then? You know these people. They’re everywhere this year. Call me crazy, but I think there is something to be missed if we only celebrate our team when it is fashionable.

I grew up in a household that was, in a sense, exclusivist. “There’s only one real sports team” my dad has often declared. “And that team is the Boston Red Sox.” It seems natural, but the Sox are my team and I have supported them for years—even during the Roger Clemens ordeal.  What strikes me as odd is the prevalence of these band-waggoners. It seems to me that they are missing out on the elevated joys and struggles when participating in a larger narrative.

The same can be said of a spiritual experience. It is all too common for someone to fail to support their beliefs when things are not going well. I have a baptized Sikh friend who has cut his hair and does not wear his dastaar or turban (contrary of traditional Sikh practices) because he has admitted that him wearing it isn’t cool in the U.S. When the GAP campaign received widespread applause for its spotlighting a Sikh in a turban in the face of racism, he started wearing his turban again. Openly, he has admitted that this event made it cool again.

Like sports fans, do we shy away from our religious communities when they are on the down and out, only to return when they enjoy praise? There have been times when I have found myself running from the Westboro Baptist Church when they make the headlines, espousing hatred as apart of Christianity. Yet, I have been the biggest fan of Pope Francis and his struggle against economic oppression.

I’ve heard it said that the right way is often not the popular way. I’ve heard it said that the journey only is beginning when you find your spiritual home. I plan to speak up and act out when it comes to my fair-weather faith. I will try to grapple with my convictions and my spiritual journey—even the difficult and ugly parts—in an effort to persevere through the tough times. A line in T.S. Eliot’s poem Ash Wednesday comes to mind: “Wavering between the profit and the loss/ In this brief transit where the dreams cross”. I hope to find this space between the profit and the loss. Only there will I find clarity and my conviction…

So whether they win or not… Let’s go Seahawks.

Previous POLL: Should the government have the option to execute the worse criminals?
Next Spokane Christians pray to end abortions