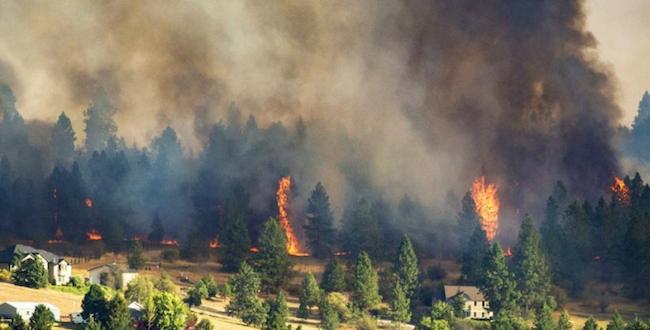 Read part one of this series and part two and part three.

Unless your job is focused on dealing with emergencies – firefighter, police officer, paramedic, emergency room personnel, etc. – the odds are very small that you will deal with an actual emergency.  For example, in the 11 years I lived in Washington state, there have been only two real emergencies that sort of impacted my family:

These emergencies are nothing compared to hurricane Katrina in New Orleans or hurricane Sandy, which was a historic storm “because it was a late season hurricane combined with a Nor’easter at high tide during a full moon” – the worst possible combination of events producing “devastating results not seen in generations.”

The response to any emergency will be determined by your preparedness, the time frame you have for reaction, and your physical and emotional state.

In the case of the forest fire, when our friend called asking if he could stay the night, our response was a quick, “Yes!”  We had a spare bedroom that required no real work to get ready and we had plenty of food on hand to him and others if necessary.  And we had some warning because we knew that we had friends in the area that had been ordered to evacuate – so the call was not unexpected.

The wind storm was even easier to respond to – my wife and I where 200 miles away on vacation and our only concern was for our daughter’s family who lived in our neighborhood.  And while their house was without power for a week, they were able to move to our house when power was restored the next day.

The degree of preparedness is focused on what planning you done, the supplies you have assembled or have access to and your ability to execute the plans you have made. Hurricane Katrina is an example in which there was no planning on anyone’s part if the levees failed, people didn’t have supplies available or couldn’t get them once the flooding started, and there was no possibility of people utilizing escape plans.  It was the “perfect storm” in terms of the cascade of events which resulted in the consequences just getting worst and worst.

The amount of time you have between the first indication of the emergency and when action must be initiated directly affects how you can respond.  In the case of the forest fire, I had time to gather information on the status of the fire and its projected path; what areas were under evacuation orders; review what resources I had available and even identify people who would likely need help.  Because I had that time, I was able to consider everything and was ready when the call came.  In the case of Katrina, the residents of New Orleans weren’t prepared for the levees failing and needing to flee.  As a result, hasty decisions were made that resulted in horrific situations – to the point that people turned on each other rather than uniting.

The shorter the time frame, the greater the stress – you don’t have time to carefully gather information and make decisions.  You have to act NOW!  You will decide on what looks the most promising or only on what’s offered – not evaluating all possibilities because your brain is focused on survival.  The only antidote to this condition is training and preparation – in essence, making the necessary decisions before the emergency hits.

Your Physical and Emotional State

If you are in a weakened state – for whatever reason – an emergency will weaken you even more.  When you first become aware of an emergency, your body will kick into overdrive – it’s the survival instinct.  Your heart will beat faster, you will breath faster, your blood pressure will spike, you’ll become super aware of your surroundings – it’s your heritage from our caveman ancestors dealing with saber tooth tigers.  Those that are physically frail tend to be the ones who are hurt most by emergencies.  Those who have compromised emotional states tend to be discouraged easier and more likely to “give up” rather than pushing on.

This is where it’s important to have a network of family and friends – it’s someone to share the burden of response with.  It’s encourages and, at the same time, gives a reason to keep trying because we don’t want to “fail” those that depend on us.  Those who are part of a “community” of whatever shape know they have people who will help them and that need their help.  It gives purpose in the midst of chaos.

If you are lucky, you may never have to deal with a real emergency – many people are lucky.  But there’s always the possibility that an emergency may involve you.  Being prepared with the right knowledge, resources and mental state will help you respond better, faster and more effectively.  And the life you save may be your own.

Previous More ‘nones’ than you think, but many won’t show up on Election Day
Next Charlotte marchers demand police release shooting tapes