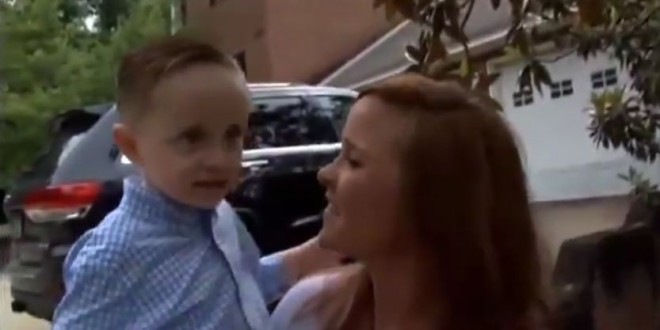 File this under “the faith of a child.”

Recently, CNS News reported that the faith of a young 5-year-old boy fed a homeless man, while touching a number of hearts.

While at a Waffle House in Alabama a few weeks back, young Josiah Duncan spotted a homeless man.

“We saw a man who was dirty holding a bag with his bike outside,” said Ava Faulk , Josiah’s mother.  Josiah, WSFA said, peppered his mother with questions.

“What does that mean?” Josiah asked.

And, WSFA said, “apparently, the unnamed man didn’t have any friends to lean on, either.”

Josiah seemed upset the man didn’t have any food, and wanted to do something about it. He insisted that his mother buy the stranger something to eat. She listened to her young son, and then obliged, WSFA added.

“He came in and sat down, and nobody really waited on him,” Faulk said. “So Josiah jumped up and asked him if he needed a menu because you can’t order without one.”

The man initially insisted on something cheap, but was told he could have whatever he wanted.

“Can I have bacon?” Faulk recalled the man asking. “And I told him get as much bacon you want.”

But before he could eat, Josiah insisted on doing one thing.

“I wanted to say the blessing with him,” he said. And he did, publicly, right there in the Waffle House with 11 other customers looking on.

“The man cried. I cried. Everybody cried,” Faulk said. The story even brought a tear to this grizzled old Marine’s eye.

The man ate and went on his way. WSFA said the man “left with a full stomach, while Ava Faulk left with a full heart topped off with what she considers a touch of divine wisdom.”

We sometimes need to hear stories like this to help us take our minds off the nastiness that pervades so much of this world.

“We are all brothers under the skin,” Ayn Rand once said. But unlike Rand, we don’t need to skin humanity to prove it.