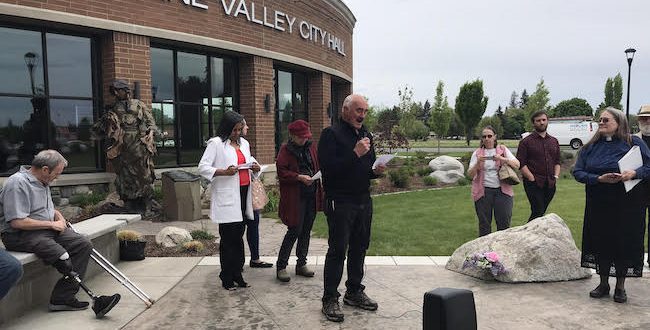 About 40 people gathered at the entrance to the City of Spokane Valley Council chambers during the late afternoon on Tuesday. Members of the group  Faith Leaders, Leaders of Conscience, along with representatives of the Jewish, Muslim, Buddhist and Christian faiths gathered to perform a vigil and mourn the damage done to the City of Spokane Valley’s reputation by the recent xenophobic, racist comments and behaviors indulged in by Representative Matt Shea of the 4th Legislative District.

A card filled with healing words and quotes of encouragement from all those who attended the vigil was presented to the Council members, who had all been invited via email by the Rev. Gen Haywood of Faith Leaders, Leaders of Conscience, a day earlier. The emails included details of proceedings and program for the evening. The letter outlined that the vigil was being held to mourn, and begin the healing for the damage done by Shea.

The statement below was compiled as a collective effort by ‘Faith Leaders, Leaders of Conscience. It was read by three persons at the entrance, as credited below. Myself, Naghmana Sherazi, a Spokane City resident read it out in its entirety on the floor so that it now becomes public record.

Next was Wayne Shull, who said, “As we gather this evening, we first recognize and honor that we are gathering on the occupied ancestral homelands of the Spokane Tribe. We are mindful of this especially here at our city hall with the beautiful sculptures that honor these ancestors. As we are mindful of the past, we must act in the present. We come here tonight to mourn the damage done to the reputation of our city by the words and actions of our State Representative Matt Shea and those who follow him. The immorality must be raised so that good people can end their bad behavior.”

I read next, and said, “We come to this time of keeping watch, of making a vigil, to open hearts and minds, to turn around from ideologies of fear that would condone the spying on our fellow citizens. We come with grief that our representative supports the idea of taking down our government and encourages citizens to arm themselves for the downfall of the government. Those of us who are Jewish, Christian, Muslim, Hindu, Sikh, Bahai, Buddhist faiths, or have a conscience, declare that Christian extremists like Rep Matt Shea do not represent us. We encourage all citizens to join us in this stand.”

The third reader concluded by saying, “We align ourselves with facts not conspiracies, and dedicate ourselves to be humble enough to change direction when we become aware of mistakes or misinformation. We ask the same commitment from all community leaders. It is the all citizens’ duty to expose extremism in all forms and it is, also, each elected officials obligation to build a society that is just for all. This is hard work and requires vigilance. Each citizen and elected official of every faith and non faith, age, color, and class must speak up and stand together. Everyone, mourn with us over how Spokane Valley has been painted as a place of Christian extremism and white supremacy. Elected leaders and citizens join together and help turn this image around. Let us dedicate ourselves to being a city where we speak up and stand up so that this city we cherish shines brightly as an example of how neighbors can live in peace.”

Previous Two Men. Two Journeys. One Ramadan.
Next Only her body is broken