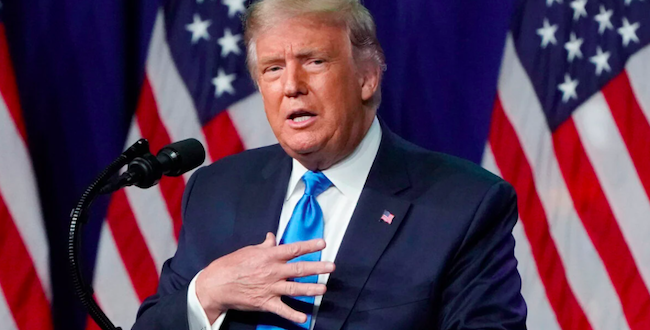 As news of President Donald Trump’s positive COVID-19 test spread, prayers began flowing for his recovery and for the recovery of First Lady Melania Trump.

President Trump tweeted the news of his positive test shortly after midnight Friday (Oct. 2), saying that he and the first lady would quarantine in the White House. “WE WILL GET THROUGH THIS TOGETHER!” the president said.

Tony Suarez, vice president of the National Hispanic Christian Leadership Conference and faith adviser to the Trump administration who was with Vice President Mike Pence at a Faith and Freedom Coalition event on Wednesday (Sept. 30), told Religion News Service that he woke up to the news and immediately sent an email prayer to the president.

“I know a name greater than COVID, corona, or SARS, it’s the name of Jesus and I pray healing in that wonderful name over you and the first lady,” he wrote. “Rest and get well sir. See you back on the campaign trail soon.”

Beth Moore, a well-known Baptist Bible teacher, added her prayers, saying she’d begun praying after hearing the news early Friday (Oct. 2). She cautioned Christians of all political persuasions to show compassion.”This is not partisan. This is Christian. God, help us in these difficult days,” she wrote.

The Resistance Prays, a progressive faith group that has been deeply critical of Trump, released a statement urging its followers to pray for the president and the first lady, asking that their bodies and hearts would be healed and that this would “move them towards compassion and justice.”

“While we continue to resist evil and the government’s abysmal handling of the Coronavirus that has led to more than 200,000 deaths, we must also recall Jesus’ teachings to love our enemies,” their statement read.

The Rev. Laura Everett, executive director of the Massachusetts Council of Churches, added her prayers on social media: “I pray for Mr. & Mrs. Trump, pray they do not suffer from #COVID19, pray as I always do for their hearts to soften, and entrust them into God’s care.”

Everett also added a mini-sermon to her prayers, reminding followers who disapprove of Trump not to gloat.

“I know it’s deliciously tempting, but ‘I told you so’ is a bad look,” she wrote. “I believe in accountability. I believe in justice and recompense. AND I also try for a long game- give people enough space to turn around when they’ve been wrong and get on board heading in the right direction.”

Johnnie Moore, a longtime faith adviser to the president and a commissioner for the United States Commission on International Religious Freedom, tweeted out a prayer early Friday morning.

“Dear God, Please touch (President Trump) and (First Lady Melania) with your healing grace, guiding the hands of all of the medical professionals treating them,” the tweet read. “Give them a speedy recovery. I thank You that You made them so strong. God, do the same for every person in the world facing the same. Amen.”

Vocal Trump supporter and evangelist Franklin Graham also tweeted out prayers for the first family, asking followers to join him in “praying especially for them, that they would have a quick recovery.”

Keisha Lance Bottoms, the mayor of Atlanta, also sent out thoughts and prayers for a speedy recovery for the president.

Previous Suicide Prevention and Religious Responsibility: Where Do Places of Worship Stand?
Next VIDEO: October Coffee Talk to focus on “Living in a Time of Fear”