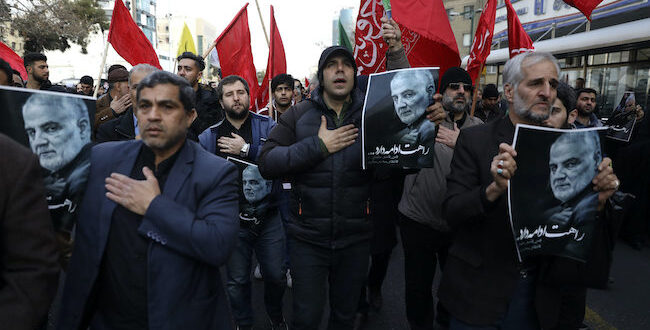 Protesters mourn during a demonstration over the U.S. airstrike in Iraq that killed Iranian Revolutionary Guard Gen. Qassem Soleimani, shown in the posters, in Tehran, Iran, Jan. 3, 2020. Iran has vowed "harsh retaliation" for the U.S. airstrike near Baghdad's airport that killed Tehran's top general and the architect of its interventions across the Middle East, as tensions soared in the wake of the targeted killing. (AP Photo/Vahid Salemi)

Religious leaders were split along liberal and conservative lines in their responses to a U.S. drone strike that killed Iranian military leader Qassem Soleimani early Friday (Jan. 3), although even President Trump’s staunchest evangelical Christian supporters appeared unsettled about the potential blowback from the attack.

Prominent clergy of all stripes called on people of faith to pray to avoid war in the Middle East.

Pentagon officials confirmed last week that U.S. forces had carried out an airstrike near a Baghdad airport on President Trump’s orders that killed Soleimani and others connected to Iran-backed militias operating in Iraq. Analysts have characterized the incident as a dramatic escalation of tensions in the region that could lead to war, and Iran’s supreme leader, Ayatollah Ali Khamenei, promised “forceful revenge.”

The Rev. Franklin Graham, son of famed evangelist Billy Graham and stalwart supporter of Trump, tweeted his affirmation of the strike, broadcasting the White House’s justification for Soleimani’s death, but did not specifically discuss the potential for war.

“Qassem Soleimani was responsible for countless deaths inside & outside Iran & was actively planning more terrorist attacks,” Graham tweeted. “We need to pray that God would give (President Trump) wisdom & protect him, his family, & our troops in that region from evil.”

The Rev. Mark Burns, a South Carolina pastor who stumped for Trump during his 2016 campaign, tweeted “Dear Lord protect us from World War 3.” He later tweeted his congratulations to Trump, saying, “America is safer and more protected than ever against those who seek to do us harm under your presidency.”

Johnnie Moore, founder of the Kairos company and widely considered the de facto spokesman for Trump’s unofficial cadre of evangelical advisors, argued that it was “impossible to overstate the significance” of the strike.

Progressive faith leaders, such as activist the Rev. William Barber, decried the missile strike as a rash decision.

“Please don’t just blame Trump for where we are now,” tweeted Barber, co-chair of the Poor People’s Campaign. “Name all those who have lied for him, upheld him, covered for him, put false religion around him, & enabled him. If we end up in war, there must not be selective amnesia. Anyone who didn’t speak up bears the blame.”

The Quakers’ advocacy arm in Washington, the Friends Committee on National Legislation, condemned what it called the assassination of Soleimani and called on Congress to “assert itself as a voice for peace, for the good of people here and abroad.”

Others, such as Imam Mohammad Elahi, a Shia interfaith leader in Detroit who was reportedly born in Iran, also stressed the need for peace.

“The Quran reminds us that this life is a testing struggle and the patients are promised God’s good news!” he wrote. “Let’s pray no more war escalation between Iran and the US! There was no reason for any of these tensions!”

Another Muslim voice, Nihad Awad, national executive director of the Council on American-Islamic Relations, suggested in an Arabic language tweet that Trump may attempt to use the event to “cover his impeachment trial and re-election campaign in 2020.”

But progressive Jewish groups in the U.S. responded with concern about potential backlash. Jewish Voice for Peace tweeted out “No War with Iran,” and Rabbi Jill Jacobs, head of the Jewish activist group T’ruah, called the strike “an extremely terrifying development.”

She added: “(this is) your periodic reminder that this administration walked away from a negotiated agreement aimed at preventing war.”

The divide among religious leaders echoed the opinions being shared by religious Americans on social media. By Friday afternoon, the hashtag #PrayforPeace trended on Twitter to signal opposition to war with Iran.

The Red Letter Christians, a coalition of progressive evangelicals, issued a statement that said, “We invite all Christians to join us in denouncing this recent act of aggression by the Trump Administration.” While acknowledging that not all Christians are pacifists, the statement argued that the attack on Soleimani did not meet the standards of just war theory, first put forward by the early Christian church father Augustine.

But more broadly evangelical Christians have expressed support for military action against Iran in the past. In June, a Politico/Morning Consult poll found that 51% of evangelicals strongly or somewhat supported military action in Iran after the country’s Islamic Revolutionary Guard shot down an unmanned U.S. drone over the Strait of Hormuz. Only 29% of “religious non-Protestant/Catholics” said the same.

Trump is slated to address an expected crowd of 5,000 evangelicals on Friday evening at El Rey Jesús church in Miami, Florida. The event is meant to kickoff an “Evangelicals for Trump” initiative for Trump’s 2020 re-election bid. He is expected to address the importance of the attack on Soleimani.