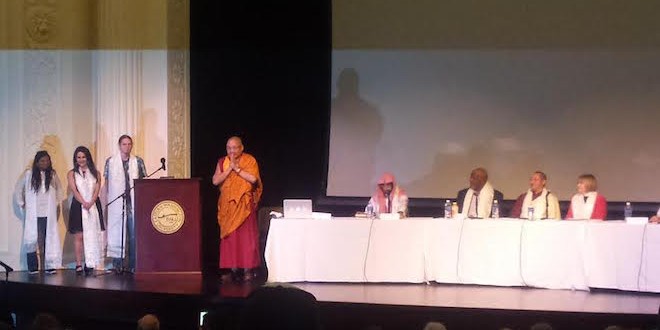 All of the speakers expressed the importance of initiating progressive dialogue between different religions and cultures. Iain Finnigan, president of the EWU Buddhist club, said that awareness is the first step.

“What we try to do, and what this conference accomplished, is to bring awareness to other religions,” he said. “Conflicts often are the result of religious intolerance, or at least religion is a huge component in them. Dialogue promotes religious harmony, which can create peace.”

The speakers came from vastly different backgrounds, but are all grounded in their faith’s mission to cultivate peace and understanding. Shahin, a Palestinian refugee, spoke about the Quran’s merciful and loving depiction of Allah. Bronx native, Watkins, likened interfaith dialogue to the unifying dream of Dr. Martin Luther King Jr.

Wee discussed the importance of cultivating love for everyone, despite differences.

“Hearing other’s stories is very important,” Wee said. “If you don’t hear other people’s stories, it’s easy to get stuck in a box, but when you bring everyone together, it expands what we knew before.”

Finnigan says that tolerance towards other’s faiths also means being accepting of their cultures.

All the speakers focused on the qualities that unite them, rather than their differing views. Finnigan says this is one of the most important lessons to learn.

“There are fundamental values with every religion, and we have more common ground than differences. That’s what I hope people take away from this.”

Previous Kronos, Christ and the Curse of Fathers Who Eat Their Sons
Next SpokaneFAVS to present at Parliament of The World’s Religions