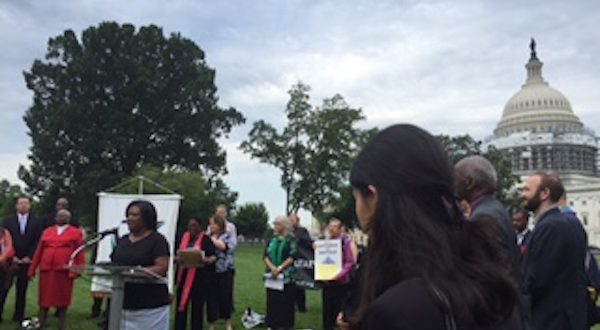 On June 15, The Leadership Conference on Civil and Human Rights, The National Council of Churches and The Interfaith Criminal Justice Coalition, brought together faith leaders of different denominations from around the country to pray for success in pushing Congress to support Sentencing Reform legislation pending in both the House and Senate. As an intern of The Leadership Conference, I had the privilege of watching the day unfold. The vigil began with an impassioned, bold speech by Rabbi Jonah Dov Pesner, who spoke of how this issue has buckled together people across denominations. From there, there were testimonies, stories of forgiveness and recovery, and an interfaith affirmation led by Dr. Sayyid Sayeed, Bishop Reginald Jackson, Rabbi Jason Kimelman-Block and Rev. Dr. James Harrison. All of whom represented the leadership from varying faiths who were in accord with fighting against an unjust and debilitating criminal justice system.

The severity of the disparities in the criminal justice system are not foreign to me. I have always been aware of the unfair sentencing handed down to low level drug offenders, particularly when they are African American or Latino. I’ve known for a while how damning policies such as mandatory minimums for drug offenses have been for my community. I, however, have not personally experienced the impact of this injustice. I grew up in a stable home, away from the pitfalls of poverty, the temptation of drugs and the absolute invisibility of resources.

I could give someone a rundown of the specific components that went into mandatory sentencing. For example, the former 100 to 1 disparity in the sentencing of crack vs. cocaine and the economic burden on tax payers to keep people convicted of low-level drug offenses behind bars. However, I couldn’t tell you what it was like to have a mother or father ripped away and put in a cage with a sentence that mirrored that of a murderer, when they were actually an addict. There was no recollection in my mind of what it felt like to have your youth ripped out of your hands, for one or two wrong decisions. Or for being in the wrong place at the wrong time or for simply buying into a trade in order to survive in an ecosystem that is not fit for human beings to begin with.

But these are all things, places and sentiments that were presented to me at the prayer vigil. Standing there listening to Teresa Hodge speak about her time in prison for a nonviolent white collar crime, opened my eyes to the families that are affected by our currently unjust prison system.

This truth was not one I had ever pondered before, but having heard it, I now completely agree. Craig DeRoche, the senior vice president for advocacy and public policy at Prison Fellowship, the nation’s largest outreach to prisoners, former prisoners, and their families, spoke of being formerly incarcerated. He talked of the inexplicable pain of having your whole life ahead of you, and watching it toil away for 25 years behind bars for a non-violent crime committed out of survival.

Currently there has been a good amount of support for the bill, garnering bipartisan support from some members of Congress. Unfortunately, there are still many members on the right whose hesitations come from fearing that it goes soft on crime. In a meeting I attended with Rev. Dr. Russell L. Meyer, executive director of the Florida Council of Churches and Krissy Roth with the National Council of Jewish Women, with Florida Representative Micah’s legislative assistant, he expressed some of the Representative’s fears specifically regarding the Sentencing Reform Act in the House. Namely, that for those who have fought to implement drug policies that push people to stay away from drugs, like himself, supporting the Sentencing Reform Act would be taking a step backwards. He went onto to say that the representative worried about the message this bill would send to kids who are tempted to experiment with drugs.
But the reason The Leadership Conference called upon America’s faith leaders to speak with their congress men and women—was to shape the narrative and show that mass incarceration is a moral crises that people of all faiths should be committed to. Is it right for us to sentence a teenager with a small amount of an illegal substance caught in the wrong place at the wrong time, to 25 years behind bars? This isn’t justice, and it tells young people, particularly African Americans, how little their lives actually matter. Rev. Dr. Russell L. Meyer made the following point in Representative Micah’s office.

“In my community, these drug policies tear families apart, I’ve seen it. What happened to forgiveness? What happened to redemption? These are nonviolent offenders that are being put away for an addiction. You don’t put someone with lung cancer in prison because they smoked cigarettes and got cancer. So why do we punish nonviolent addicts who have an addiction from the result of doing drugs?”

It most definitely makes you start to ask questions about how genuine the politicians who preach the loudest about their connection to a higher power are. Because when it comes time to exercise the qualities they claim to cherish from their faiths, they rarely do. The hesitation toward passing the Sentencing Act before the Congressional recess is just another example. But that was why having faith leaders come together on the 15th was so important. It forced Congress members who claim to have such strong faiths, to actually exercise their compassion, empathy and mercy.

The proposed legislation would reduce the penalties for some mandatory minimums imposed on people convicted of certain low level drug offenses. While it is an incremental step towards broader mandatory minimum reforms that to The Leadership Conference and its other partner organizations are aiming for, it is a step in the right direction. And the presence of the large, diverse gathering of faith leaders that showed up in front of the Capitol, represents just how important this issue is across religious communities. Their resilience, commitment and allegiance to justice was shown to be impenetrable on Wednesday, and it is clear that it will continue to be. In the words sung by the talented Sesheida Young and the entire faith congregation as the morning prayer vigil came to a close, “We who believe in freedom cannot rest. We who believe in freedom cannot rest until comes.”

Previous Whitworth Institute of Ministry to focus on Christian Discipleship in the 21st Century
Next Research: Only 5 countries give LGBT people equal constitutional rights