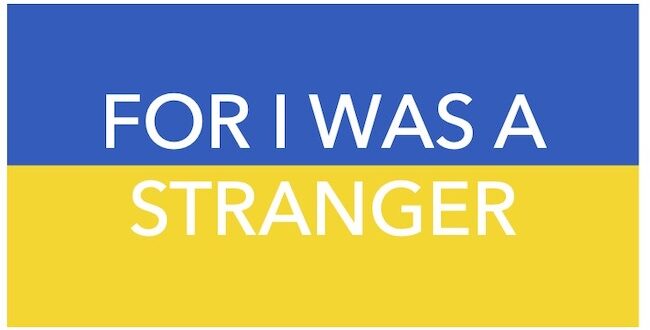 Rev. Katy Shedlock To Perform Original Play ‘For I Was A Stranger’ to Raise Money for Ukraine 

Rev. Katy Shedlock To Perform Original Play ‘For I Was A Stranger’ to Raise Money for Ukraine

In the late 17th century the word refugee entered the English language. It has its root in the French word, réfugié, which means ‘gone in search of refuge.’ About 220 years later, Oxford Languages defines the word as “a person who has been forced to leave their country in order to escape war, persecution, or natural disaster.”

The Rev. Katy Shedlock adds another meaning: a refugee as a person who has a sacred story to tell. She wrote “For I Was a Stranger,” a one-person play that combines her creative talents and her faith, to highlight that sacredness and to invite others into those stories.

In addition to co-pastoring Creators’ Table at West Central Abbey and Audubon Park Methodist Church, Shedlock is an actress, poet and playwright, who has been writing plays since she was in elementary school.

Shedlock wrote her play – about four biblical women who were refugees – in 2017, while she was attending Iliff School of Theology. Having only performed it a handful of times, she will resurrect her production to raise money for Ukraine on Saturday at West Central Abbey at 7 p.m.

A confluence of events inspired her to write the play.

“I was walking my dog one morning and absorbing the news about the executive orders and wrestling with what I could do about it,” said Shedlock in email. “In particular I felt that I wanted to help remind Christians, especially Christians who had voted for Trump, that our Bible is full of refugee stories.”

At the same time, she was given an assignment in her seminary preaching class to write a first-person monologue from the perspective of one of the people in the Bible.

“So, all those things came together in this idea for a series of monologues, drawn from Scripture that follow the refugee journey from displacement, to arrival somewhere else, to resettlement and building a life in a new place, to eventually returning home,” Shedlock said. “Not all refugees experience all those pieces of the journey, but I wanted to give the audience a compelling moment and a compelling character to connect with for each step.”

She has since added space in her monologue for a music collaborator and asked Karli Ingersoll, a Spokane-based musician and artist, to create original music that compliments the stories.

“I said yes because I am a fan of Katy’s poetry and I love collaborating with artists of other mediums,” said Ingersoll in email. “My goal is to add a little extra reflection time and to accent some of her words, and I think music is a great platform for that.”

Despite the play being written in the past, the stories told will speak once again into the lives of modern day refugees from across the globe, including those who have recently fled their homes in Ukraine, says the Rev. Alissa Bertsch, lead pastor of Cheney United Methodist Church, where Shedlock first performed her play.

“Using minimal props and rich monologue, Rev. Katy Shedlock brings to life Biblical stories of women experiencing flight, displacement, and resettlement in such a way that from the opening moments you are transported from your seats right to the edge of the Red Sea, heart racing, arms full, with everything you called home left behind,” said Bertsch in email. “Before you know it, your heart is filled with empathy for those who flee war and violence, and you leave transformed, knowing you have been offered the opportunity to move from passive observation to compassionate action.”

Shedlock wants to make the cost to attend accessible and will be offering two ticket prices: $20 and $50. All the proceeds will go to the United Methodist Committee on Relief’s humanitarian work in Ukraine.

In addition to funds being raised, Shedlock hopes worldviews are expanded and compassion is increased toward the plight of refugees, no matter how one defines the term.

“I want people to feel connected both to the suffering and to the hope of what’s happening to people in Ukraine,” said Shedlock. “All refugee stories, whether they come from Scripture or from the headlines, are stories of incredible survival and resilience.”

www.underhisshadow.blogspot.com
Previous A date with Ramadan
Next VIDEO: Coffee Talk on Ukraine, Democracy