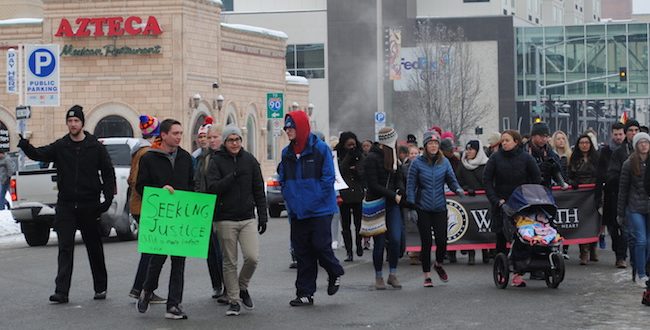 Faith in the Streets: a Civics Lesson

This weekend I watched my community exercise its freedoms, and I am grateful.

My small church has a long-standing tradition of walking from our building at 1428 West Broadway to downtown Spokane on the morning of Martin Luther King Jr. Day. We join the rally and march by walking from our place of worship, holding a banner with our name. We’ve recently expanded the tradition by adding breakfast, singing and simple reflections to start.

I never know who will come or what will happen as the day goes along. It’s an early start: 8:30 a.m. This year was mighty cold: single digits all morning long, gorgeous frost lining every tree branch and pine needle. Who would come out?

Well, by 8:45 there was a happy cross-section of folks milling around and chatting while eating breakfast in our gymnasium. Everyone from our synod bishop to a neighbor about to be evicted. Folks in their 70s to a 10-year-old girl, plus a handful of other littles and two infants-in-arms. Lutherans, Jews, Episcopalians, Presbyterians, Evangelicals, and folks without a faith home. All talking over their coffee, scones and egg casserole. We sang “Lift Every Voice and Sing.” It was a little glimpse of the kingdom.

We walked through icy air, waited in a beefy line to pass through security, then joined a few others of our flock inside. Then things got interesting in a new way. As our congressperson Cathy McMorris Rodgers took the stage, you could feel the tone of the room change. Booing and one-liner complaints began to rise from the crowd as she spoke: “Liar!” “Bullshit!” Then someone started a chant that caught on quickly and I myself joined: Save Our Health Care. It rose in volume until I couldn’t hear the congressperson’s voice any more.

The host of the event took the microphone again and scolded the audience, appealing to the presence of children in the room who were “watching us.” Folks clapped when she asked us to favor unity in all our actions.

While I wish each comment that hailed from the crowd toward the stage this morning had been civil and free of profanity, I worry not for any children. I’m so glad our 10-year-old member was standing near me and heard every comment. She witnessed live a demonstration of democracy, as well as discipleship.

As more years separate us from the real life of Martin Luther King Jr., I hear his memory called upon more and more in the same way I hear the name of Jesus called on: what would Jesus do? Would Jesus shout profanities at an elected official who had an invitation to address a crowd? Would MLK Jr. have engaged in such disunity as this?

I don’t know how to answer those questions, but I do know that both men used language and speech to confront evil. Cathy McMorris Rodgers herself is not evil. She’s a human who has made, in my opinion, very poor decisions for our community and state and nation. What is evil is the disregard such decisions have for the land, the poor and people of color. What was painful about her speaking at the rally today, before anyone booed or complained, was the patronizing story she told about befriending (literally) a black man who works the elevator in her building. (Um, 1950 is calling and wants its anecdote back…)

Scripture invites Christians to “pattern our lives on the Lord Jesus Christ.” I don’t think this invites us into presuming we know in any given situation what Jesus “would have done.” Rather, we look to the cross as the ultimate affirmation of the way of Jesus being the way of non-violence, turning away from power-as-domination even though it led to the ultimate sacrifice. What the cross also does is expose false power as just that: empty and self-aggrandizing. Jesus spoke with clarity to Peter, “Get behind me, Satan.” I don’t think following Jesus means we forget the ability to speak truthfully in public.

Power without love is reckless and abusive, and love without power is sentimental and anemic. Power at its best is love implementing the demands of justice, and justice at its best is power correcting everything that stands against love.

I saw an empowered community speaking a hard truth today, which, while awkward, is loving at its core. I love the people in my congregation who would die without health care funded by the nation and state. I can’t fathom why some connect basic health care with the ability to work. I respect their right to think that way, but I will also speak up for what I believe.

So yes, I chanted with the crowd against my congressional representative today. And while I washed the egg bake off the dishes back at church in the afternoon, I came to think it was the right thing to do. believe I did so lovingly and truthfully, as a citizen and a disciple. Now the real work continues: to keep fellowship with all of God’s beloved (that’s everyone) and stay engaged as a thoughtful citizen.