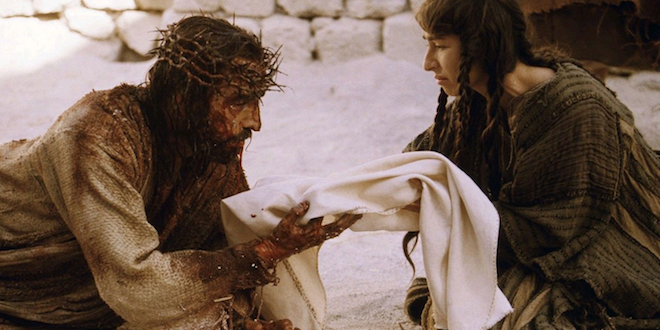 Scene from Passion of the Christ

How often do people go to church in movies? How religious are they?

Is it a good idea to actively address the religious convictions of peoples in movies? And does it make for good art?

Does it need it to make good art, or is the pious intention justification enough?

We can set aside movies that are overtly religious in subject, such as “The Passion of the Christ.” Or “The Song of Bernadette.” Or DeMille’s kitschy but spectacular “The Ten Commandments.” Or “Quo Vadis.” Or “Ben-Hur.” Or “The Robe“. Ah, but by then you’re on turf where the religious-themed tale is spread out for a popular audience, and things are not always what they seem.

“The Song of Bernadette“ still works as fine drama, with a magnificent film score by Alfred Newman, emotionally moving even if you don’t accept that the Virgin Mary actually made personal appearances as Linda Darnell in the grotto of Lourdes. And “Ben-Hur“ is still a rip-snorting epic (with yet another excellent score, by Miklos Rozsa) even as the clearly miraculous leprosy healings remain as the climax of the film.

It may be that great music is more important to the impact and success of such overtly religious tales than their theological veneer.

Take Alfred Newman again, whose score for “The Robe” is immensely powerful. And yet, the secular screenwriters of “The Robe” (one of whom was excised from the credit list for many years as a blacklisted Communist) had trimmed away every overt miracle, and the studio released a story of tolerance and prejudice that just happened to have a gospel-period setting. The film was so poignant and reverential on the decency of their Christian protagonists that nobody noticed the absence of the supernatural (I only realized the significance of this while listening to the commentary interviews accompanying the recent BluRay video edition).

Step away from first-century Rome, though, to how regular modern folk are shown on film, in their daily lives, and we encounter a more equivocal picture.

I’ve seen a lot of movies, and by and large we don’t really know the convictions of the people in them unless it’s integral to their character or situation. No surprise that Father Flanagan is a Roman Catholic in “Going My Way.” Lots of nuns in “Sound of Music.” People do occasionally go to church, but usually for weddings or funerals.

But is Rick from “Casablanca“ religious or not? Do any of the characters in “Some Like It Hot” have any doctrinal convictions? We have no idea. And not knowing that doesn’t diminish our enjoyment of those films.

But do we really know much about even Father Flanagan or the Austrian nuns, their doctrine or beliefs? Not really. They act as good people, so presumably their faith has informed their behavior, but nothing is belabored about it on screen. Certainly not an exploration of the doctrinal correctness of the Trinity over Unitarianism.

How about movies explicitly depicting gods, or their prophets? Those must be pretty religious, mustn’t they?

Not necessarily. There are more gods per square inch in “Jason and the Argonauts” than any film I can think of, and every character in it accepts their reality, but no one watching this Ray Harryhausen classic is going to take it for a film about faith in the Olympian pantheon. Though it could easily have passed for one had there been movie theaters to show it (with Greek subtitles) in Athens circa 300 B.C.

Similarly, a film infused with Christian concepts of good versus evil can be devoid of deities. There’s not a god to be found, no shrines or priests or religious observances anywhere in Tolkien’s “The Lord of the Rings,” despite the deep personal faith infusing it, or its devout Christian author. We do get a clog of magic, though, from incantations to that pesky Ring everybody’s after. And it’s hard not to see Christian parables in devout Christian Bryan Singer’s “X-Men“ movies or his “Superman Returns.”

But is any of that faith in a non-generic sense, the sort people manifest in their day to day lives?

I think it perfectly appropriate for characters that are religious to be depicted as such in a film, and anything otherwise would not be doing them justice. Most people are in fact religious, so shouldn’t films be positively sloshing with faith moments?

And yet they aren’t. So what gives?

In American films, some of it’s due to the historical contingency of who started the film industry: lots of Jewish entrepreneurs, who presented a varied product aiming for broad commercial (gentile) appeal. Broad commercial appeal eventually had loads of sex and violence, and keepers of the moral flame (especially the Catholic League of Decency) acted as unofficial watchdog on what came on screen.

By the mid-1930s any film that violated their guidelines could get an objectionable tag, which could hurt the box office, so the studios bent over backwards to make sure their product never violated the often finicky provisions of the morality police. Which is why married couples ended up sleeping in separate beds (a practice that got carried over all the way down to 1960s television sitcoms), and how the Catholic Church got consistently favorable depiction in films during the censorship age.

Less flattering tales like “Spotlight“ would wait for a very different era and social perspective.

But that still leaves the matter of how individual faith is left to be shown on film.

Some of it turns on the demographics of screenwriters, who tend to write what they think and know, and if they aren’t religious, their characters won’t be. Or will avoid putting in religious moments if they are, to keep the script “marketable” by producers and distributors.

Dramas (especially wartime and crime stories) are more likely to show religious characters than comedies, and this holds true today on television. Stories of strife or tension where people seek refuge in their religious context, or flaunt the advice of those warning them of their dangerous path. Comedies and light adventure stories are not so solemn.

This is not all that new a phenomenon. I recently wrote a steampunk version of “Around the World in 80 Days,” and noticed the surprising way religion occurred in the original book. Sunday after Sunday rolled by as Phileas Fogg dashed around the world, and yet never once did he take note of the Sabbath. A failure to go to church while racing along on trains was understandable, but once he was on a ship, there would have been Sunday services (usually conducted by the Captain). Recognizing this historical reality, I put a pair of religious card players in my steampunk version, who declined to play whist with Fogg on the Sabbath.

Still, there was no stopping for a nod of thanks to the Almighty in the Verne novel. Maybe Verne didn’t believe much in an Almighty.

And yet two religions do show up in the book: the Brahman priests who mug Passepartout for trespassing on their temple wearing shoes, and the tendentious Mormon missionary who boors a car full of passengers on the transcontinental railroad.

Were these faiths of the Other included as a jab at religion in general by the science-geek secularism of Verne—criticism by proxy? Hard to say. But neither incident made it into the 1956 film version (the movie had Passepartout offend the general population of Bombay by trying to bullfight with a sacred cow, and no Mormons made an appearance in the American section).

So could Michael Todd be accused of hiding the faith issue, leaving the movie a delightful but religion-free excursion?

I don’t think it ever entered his mind.

And that’s the interesting question for our increasingly secular society and the media we make use of to amuse or inspire us.

Are films relating overtly to the faith of their protagonists always going to be seen as too limited, for a niche market of regional believers only, untranslatable for a general audience that may not relate to the fervency or depth of conviction? Or take it the wrong way, seeing how the Other seems to be devout even while embracing the “wrong” religion, and maybe prompting them to challenge their own convictions?

Remember, whatever faith you may hold dear, most of the planet doesn’t believe it. So any movie aiming at a global market may want to avoid restricting their audiences in so parochial a way. And this is only compounded in cultures where the depiction of religious themes is potentially incendiary (where even a pro-Mohammed biopic can run foul of the rules in certain Muslim countries).

And then there’s the bottom line.

If disconnected from the faith of the viewer, and seen only as a succession of images on a screen, is “The Passion of the Christ“ more or less “entertaining” than “Jason and the Argonauts?” Popcorn and beverage sales hang in the balance.