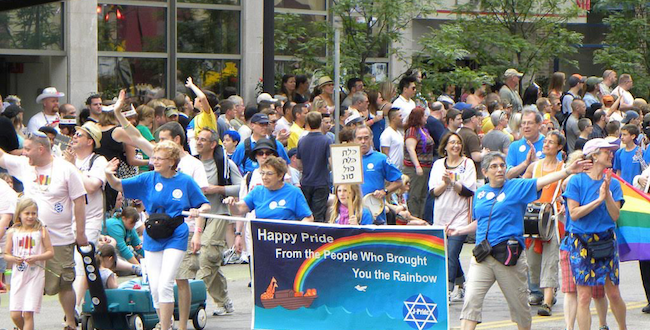 Faith doesn’t have to mean intolerance

FāVS recently published a long-germinating column of mine about my quasi-daily habit of listening to Gary Randall, radio pastor extraordinaire, hold forth every weekday at 9 a.m. on a show he calls “Straight Talk.” And Gary certainly is a straight shooter, just as President Trump claims to be. My article went live right after Charlottesville, where hatred and bigotry were boldly on display, and that gave me serious pause.

There’s a very dark side to shows like Gary’s. From conservatives’ panicked push for “bathroom bills” to Trump’s attempt, via Twitter, to keep transgender service members from serving their country, transphobia has moved decisively into the mainstream. And Gary’s anti-transgender rhetoric, based on a wholesale misunderstanding of what transgender identity is, can do real harm in our communities. His ill-informed words further misunderstanding and ignorance and provide fodder for people already predisposed, for whatever reason, to slander and mistreat transgender individuals and transgender people as a collective.

Gary has penned many a blog post and delivered many a radio sermon about the supposed evils of transgender identity. Not long ago, he even took on the widely read and praised essay “My Transgender Daughter is a Beloved Child of God,” written by Jamie Bruesehoff, the wife of an ELCA pastor, and eventually picked up by The Huffington Post. Here’s Gary’s take:

Martin Luther once said, “For where God built a church, there the devil also built a chapel.”

With all due respect, I think this pastor and his wife are attending the “chapel” rather than the “church.”

The message of “the chapel” is God loves everyone and He doesn’t make mistakes — therefore he loves Ben/Rebekah as he/she is, not in spite of, but because of… therefore God made him/her that way, in spite of what His Word of God says.

It’s upsetting to me when clergy misgender transgender people on purpose. Whatever Gary’s viewpoint on transgender identity, or this family’s situation specifically, it seems only decent to call Rebekah Bruesehoff by her chosen name. But for Gary and those who think like him, even to call a young girl by her name would reinforce some kind of satanic deception, and they refuse to participate in that.

Such extremism compels me to offer a reminder: Faith does not have to be synonymous with intolerance. This year, at its annual meeting, the Reconstructionist Rabbinical Association “overwhelmingly approved an expansive resolution affirming the full inclusion, equality, and welcoming of all transgender, non-binary and gender non-conforming individuals.” As a Reconstructionist Jew, I am proud to say that my branch of the faith unconditionally supports transgender, nonbinary, and genderfluid people.

When prominent Christians promote transphobia in the name of their faith, as Gary Randall does, it inevitably attracts a slew of critics, as well it should. Some go so far as to slander Christianity and Christians altogether, saying that the Christian faith consists of nothing but hatred and hypocrisy. This, of course, is not so. Some will even say organized religion has accomplished nothing positive in its long history. They will insist it has only sown seeds of acrimony, bigotry and, ultimately, violence. Though much harm has certainly been done under the banner of religion, this is also a skewed and incomplete picture.

In addition to saying that faith communities can uphold humane, welcoming, and loving values, it’s important for community members to affirm publicly that religious faith doesn’t have to mean anti-scientific prejudice. It doesn’t have to mean shaming and blaming. As evidenced by progressive Christian movements like the Evangelical Lutheran Church in America and the United Church of Christ, both of which are represented in our region, embodying love is something Christianity and Christians are very capable of. Also Jews and Buddhists and Muslims and Mormons and Sikhs and on and on.

That’s one of the reasons FāVS has been and remains so dear to me: People from diverse faith backgrounds can unite around the things that matter most, the values that draw us together. In light of the horrors of Charlottesville, and the fear, anger, and grief those incidents have produced, we must hold fast to the ideals we cherish: inclusion, welcoming, and love.