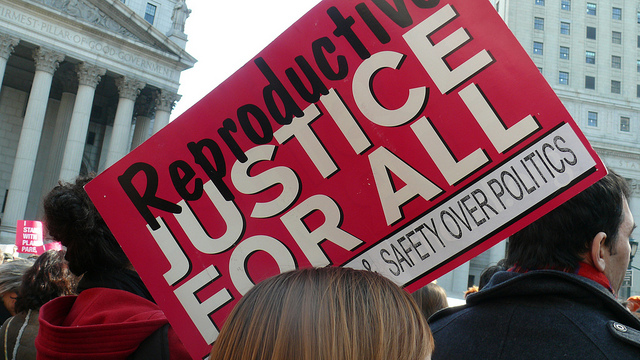 Faith and Choice: They can live in harmony

Seldom a week goes by that I am not confronted with the question, “How can you be a minister and believe in abortion?” Or, it’s more often expressed like this: “You’re a Christian and you’re pro-choice?” The circumstances seem to be even more incredible when I share with the questioner the fact that I am an Evangelical Christian and an ordained Southern Baptist minister working as a chaplain for the Planned Parenthood affiliates of Washington, Alaska and Idaho. It seems at first glance to be completely contradictory, but for me, reproductive justice is deeply rooted in my beliefs and grounded in Biblical justice as we are encouraged to express it in our daily living. For me, faith and choice are completely compatible, and can — and do — live in harmony. In truth, clergy involvement in family planning has a long and significant history.

As early as 1916, Margaret Sanger, founder of Planned Parenthood turned to Protestant and Jewish clergy who would support her efforts in family planning.  Ministers received personal letters from Sanger sharing with them testimonials of the poor and immigrant women she worked with each day, and enlisting clergy support for this controversial issue. In 1934, the Episcopal bishops voted to become the first U.S denomination to offer its support for family planning. Later, this denomination was joined by other faith communities and religious leaders who became a part of the reproductive justice movement.

In 1958 when New York City hospitals refused to offer birth control to a woman, even married women, it was the New York City Protestant Council and the New York City Rabbinical Council that forced the city to reverse its policy.  In the early 1960s, a strong clergy committee in the state of Maryland forced the State Welfare Board to reverse its policy and provide birth control for both married and unmarried women on welfare. When New York became the first state to legalize abortion in 1970, the Clergy Consultation Service, a coalition of clergy formed three years prior, opened their own abortion clinic in New York City. It became the first legal abortion clinic in the U.S. And in the more than forty years since these very significant contributions by clergy, people of faith have continually worked for reproductive justice for all women everywhere.

Why do we as clergy do this work? I cannot speak for all pro-choice ministers, rabbis or religious leaders, but I can tell you my personal reasons for being a part of this critical movement, particularly in a time when some religions seek to control both public opinion and public dialogue on many issues, including choice. I have come to a comfortable position as a clergy person who believes in reproductive choice based on these three ideas:

First, I fear the dangers of Patriarchal Theology. Human history, including biblical history, has fostered a male dominated society. Women have, for the most part, been seen as second class citizens.  The Christian Scriptures numbered populations only in the number of men of fighting age. Women and children were most often not included in these figures. This tradition of women being excluded from most of society promoted a world in which women were expected to be in submission and service to men with specific roles which were often more domestic than significant.  This concept of male dominance had not been a part of my faith thinking until I found myself in Nairobi, Kenya, East Africa, and confronted a new culture and a new reality.

One afternoon while driving to my job as a teacher in a Muslim girl’s school, I noticed a couple walking along the side of the road. The woman was obviously pregnant and carried a suitcase as she walked some steps behind her companion. Knowing that the maternity hospital was still some distance down the road, I stopped to offer a lift for them. The man immediately pushed the woman aside and began to climb into the front seat of my automobile. My reaction was immediate.  I blocked his path, assisted the woman into the car, closed the door and drove off leaving the man standing beside the road in dismay.  It was an epiphany of sorts for me in seeing a world full of inequities based on gender.  I returned to the United States from this teaching position in the early 1970’s and almost immediately began working with other faith groups to secure passage of the Equal Rights Amendment. Its failure to be codified remains one of my life’s greatest disappointments.

Second, I believe women are capable moral agents. Decision making seems to me to be gender blind. All of us as individuals make decisions throughout every day of our lives. They range from the simple (What will I eat for lunch?) to the complex (What medical course will I take for a life-threatening illness?). Women, just like men, make these decisions without having to “gain approval” from anyone else. Why, then, must a woman gain the permission of church or government to exercise her right to make personal decisions concerning her own body and life. If we believe that women are indeed capable decision makers, then we must also believe that they are moral agents who can govern their own life choices. It matters not that we might sometimes disagree with the decision a woman might make. It matters only that the decision is hers to make without interference, influence or coercion.

Third, it’s personal with me. My mother was an exceptional woman who lived a full and meaningful life. She and my Catholic father married when both were 18 and she was fresh out of high school. By the time she was 23 years old, she and my father were parents to four children with huge responsibilities to meet. This was in the 1940’s, long before birth control, and besides, a Catholic wife was expected to have many children. Looking back on that history, I wonder often what my mother might have chosen if she had choices to make about her own life. She did what was expected of her – she married and had children. But she was also faced with the need to work to help support her family, and too often  in low paying jobs at grocery stores, in school cafeterias and finally as a church secretary. Would she have chosen to go to college if it were possible? Would she choose to delay having children? Would she have wanted a professional career — perhaps as a teacher which was one of her passions? My mother loved her children (there were eventually five of us), and I am sure she would not have wanted to be without any of us.  When she died at age 75, I began to wonder if she had any unfulfilled dreams. I have wondered what her life would have been like if she had had the choices afforded women in this 21st century.

I work for reproductive justice because I do not want any woman to be denied the freedom to make her own choices about any and every aspect of her life, without the control or interference of the church or government.  I do what I do because it’s very personal for me. Can you be a Christian and still be pro-choice? For me, the simple answer is ‘yes.’